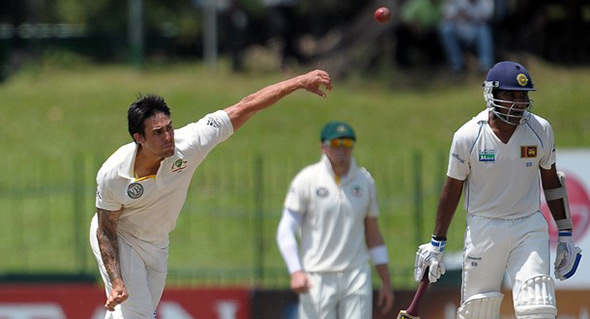 Russel Arnold responds to questions from fans in his weekly column
July 28, 2012

Sri Lanka are yet to win a Test match in Australia. © AFP

Slowly but surely, I think the Sri Lankan team led by Jayawardene are finding their feet in Test cricket as well. But by the end of this year, we have to face the Aussies in their own backyard. Even though Australia is not as strong as they used to be, they are still a very formidable opposition. Do you think we can win our first Test match on Aussie soil? What is the team that you have in mind to take the field for us in Australia? The only issues hanging around are the openers’ positions and which fast bowlers to pick, as the senior batsmen and Rangana Herath will be automatic selections. – Shanika Abeygunaratne

You got that right! It’s the fast bowlers that Sri Lanka will need to decide on. That decision will likely be made by the physiotherapist rather than the selectors. I don’t think we can make too many changes in the batting. In all likelihood, Tillakaratne Dilshan will open with Tharanga Paranavitana who, with his gutsy performance in the third Test against Pakistan, might have earned himself more time. However, Dimuth Karunaratne should also be looked at after his brilliant performance in South Africa for Sri Lanka A. I have seen a lot of Paranavitana and I am not excited. Herath and the rest of the batting, as you said, are certain to be selected. The last three spots go to the quicks. Chanaka Welegedara and Thisara Perera are strong contenders. The other spot really does not matter, as I can’t think of a fast bowler who would give us extra pace and bounce to compliment the rest of the bowlers. Therefore, I would go for the unpredictable x-factor Dilhara Fernando. The venues in which the Tests are being played would suit our style and the key will be to bat well. Once we get to that fourth or fifth day without being behind the game, the match will open up for us like it did in Durban.

Do you think Angelo Matthews should bat up the order in all forms of the game? – Jana Jude

No. I think Angelo is ideally suited for the role he is playing at the moment. Moving him up the order will force him to change his approach and I don’t see him playing the role that Mahela or Kumar play. Considering the types of players Sri Lanka has at the moment I would keep Angelo at number six, or no higher than number five in the order, for at least the next two or three years.

What was it like playing amongst the likes of Arjuna Ranatunga and what was the atmosphere like in such a dressing room? – Kushan Jayawardena

It was not too different to the atmosphere I experienced later in my career. Of course, when I first started it was intimidating. The guys in the dressing room were much older and they were guys you would sit at home and watch on TV and idolise. But shortly after, life turned out to be normal – the guys were awesome. They looked out for you and were never reluctant to offer advice. There was also lot of respect from the younger guys to the seniors and I always got the impression Arjuna was in charge; he rarely showed emotion. But there was also space for the guys to express their opinion too. Since there were quite a few who were around my age, it helped and there was plenty of jokes and pranks being played. Arjuna enjoyed this aspect of life as well. Cricket was always tough back then, with Sri Lanka trying to find its feet rather than dictate terms like now, but there was a lot of determination. It was a wonderful time and it was great to be a part of it.

How come coaches these days coach teams to play T20 cricket when they haven’t played that format at all? – Chamith Samarasena

There are many coaches who have not played international cricket but are doing really well. I think the question is valid for all forms of cricket. Having the experience behind you will certainly help but, on the other hand, the best players cannot coach either. Coaching nowadays focuses more on making sure the athlete is ready for competition. It is not just about technique and strategy. The environment, fitness and mental state all play a role and that’s why all the coaches and the support staff are important. The head coach needs to have an understanding of the sport and should be a good man manager but he does not necessarily need to be very strong in all areas. The coaching team and support staff are put together after considering the head coach’s strengths and weakness. For example, if I was head coach and my strength was batting then I might not need a batting coach in the group.

Don’t you think Kumar Sangakkara’s slow batting cost us the first ODI against India? He was too slow in his innings and put a lot of pressure on the other batsman. He was not rotating the strike mid-innings and that made other batsman take risks and get out. He seemed to have forgotten we were chasing 300-plus. – Ramesh Ranathunga

In an ideal world, yes. When chasing a big score you do need everything to fall in place. One could also argue that if one of the new batsmen got off to a flyer, that it might have relieved the pressure on Kumar. I agree that you do expect the strike to be rotated more often by your set batsman who, in this case, was very experienced and one of the best in the world. For me, though, the game was lost when Sri Lanka did not react to the chase. Just as in the third Test against Pakistan, they were happy to accept what came their way. If they did believe they could win from anywhere, I am very sure the attitude would have been different and we might have even seen changes in the batting order and Thisara used much earlier to close the gap on the required rate. That kind of intent would have made Kumar more aggressive too. The history of Hambantota was probably a factor there.

Where is Farveez Maharoof? Why was he was not picked for the ODI series against Pakistan and Indian ODI? – Sanduni Karunarathna

Maharoof is around and has been around for quite awhile. He was looked at early in his career as the next big thing but has not grabbed the opportunities. Now, with the emergence of Thisara and Angelo, I think his return is not going to be swift unless he can develop his game more to be picked purely as a batsman or just as a bowler. The fast bowling all-rounder position, which was up for grabs for quite a while, has been filled for the moment at least. And considering Thisara’s and Mathews’s age, that slot could be taken for quite awhile if their recent performances are anything to go by.