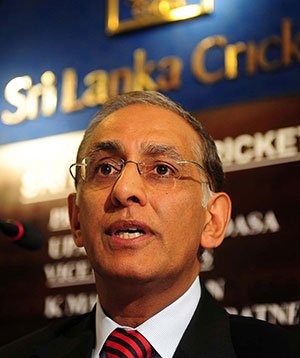 Russel Arnold responds to questions from fans in his weekly column
November 25, 2012

What do you think of Haroon Lorgat’s report on Sri Lanka Cricket? Do you agree with what Lorgat says in his report? What are the key points in his report you would like to see implemented right away? — Rakitha Samaraweera

There was nothing new in the report. A lot of it was speculation that has been floating around for some time now. But a review has now been conducted and it’s no longer speculation. He raises quite a few good points. If we can attend to the domestic structure and lift the standard, that will go a long way in helping us in various aspects, including financial. It will allow us to stay afloat while the rest of the issues are sorted out. And it must be attended to and not forgotten. More often than not, the job is being done on the field, but off the field it’s swept aside. It’s going to be a process and will take time. But if the standard of cricket at the domestic level drops, it will be tough to lift your head up, especially with all the senior players nearing the end of their careers.

Why are the selectors not offering equal chances to young players? To be more specific, I usually follow Sri Lankan domestic matches and one of the young and better players I have noticed is Roshen Silva. I have doubts on how Lahiru Thirimanne was picked ahead of Silva. According to the stats, can one justify or give any reason to select Thirimanne ahead of him? Silva’s average is over 50 and he has the better average in List-A as well. I have no doubts about Thirimanne’s talent, but I think Silva should be selected before Thirimanne, if anyone really cares about the way players perform at domestic level. — Jaliya Munasingha

Roshen does have a very good domestic record, but I would still go with Thirmanne ahead of Roshen, as Thirmanne seems better equipped at this stage. With his performances at international level, he does deserve to hold on to his spot. Thirimanne was not picked in the Sri Lanka U19 team of his time initially and was spotted by Aravinda de Silva, who wanted to know why he was not included. It was purely because he identified the talent in Thirimanne and he has been improving steadily since. Our domestic cricket alone is not sufficient to judge a player. A perfect example is Kumar Sangakkara. He was spotted by the way he played and not by his domestic record. In fact, his maiden first-class century was a Test century. Sometimes, it seems harsh on individuals who have good records at the domestic level when they are not picked, but it’s not a fault in the system. It’s up to Roshen to keep improving and be consistent and be ready when the opportunity does present itself.

Teams from the subcontinent grow up on low and slow tracks and do not perform well in Australia. They struggle to put together consistent batting performances. Test matches overseas are often lop-sided contests. Do you believe that the present Sri Lankan team can defeat the current Australian team in the upcoming Test series in Australia? — Ramesh Somasenderam

It is a very tough ask. If Sri Lanka bat well, they will give themselves a chance to win. We saw that in South Africa too. The key is to try and stay in the game and take the match to the fifth day and you never know what pressure could do to your opposition. By the fourth and fifth day, when the pitch starts turning, it will be tougher to handle than in the subcontinent. The batsmen need to get the side there. In the past, though, we have batted well in only one innings. Therefore, even with Murali, we have not been able to take the game to that situation. Our fast bowling will not scare the opponents, but you just don’t know what disciplined line and length could do.

Who do you think was better — Muttiah Muralitharan or Shane Warne? And why? — Natasha Perera

Muralitharan is my pick. Warne bowled along with some great bowlers, so there was pressure on the batsmen all the time. With Australia’s strong batting line-up, Warne also had many runs to play with quite often. In contrast, Murali had to build up pressure on his own. He did have Vass to help, but it was not a strong bowling unit though. Runs were hard to come by for Sri Lanka during overseas tours and Murali had to single-handedly create opportunities. Rarely did Murali get to bowl on a fourth or fifth day wicket away from home, as the Sri Lankan batting did not have enough runs on the board to take the game that far. Away from home, we also encountered wickets with extra grass to nullify Murali’s threat, but that was not the case for Australia because their pace attack was feared. Considering all this, it has to be Murali because he was a lone warrior turning matches around with his own effort, whereas Warne played in one of the best teams of his era and had it a lot easier than Murali.

What is your view on the Test squad that was selected for the tour to Australia? Sri Lanka are only playing two spinners. If they get hit out of the park and are not effective in those conditions, what next? Should they have gone with three spinners? Let’s face it, Sri Lankan fast bowlers are not going to trouble the Aussies. I expect to see the Aussies scoring 500-plus totals regularly. — T Jayaprakash

I guess one spinner will be fine. There is no point in playing three spinners. Yes, our fast bowlers might not scare the Aussies, but at the same time it’s tough to see the spinners controlling the game early in a Test match. The game plan is to make sure that Sri Lanka put a lot of runs on the board and hope that, together with scoreboard pressure, the Aussies can be put under pressure. I think the squad picked is a good one. The squad covers all bases and has the best talent we have. Although there are two spinners in the squad, you would probably see only one play.

Do you think any Sri Lankan player has ever been involved in match-fixing or have had dealings with bookies? — Alan A.

I have always been able to trust my team-mates and no one has given me the impression to doubt their integrity.