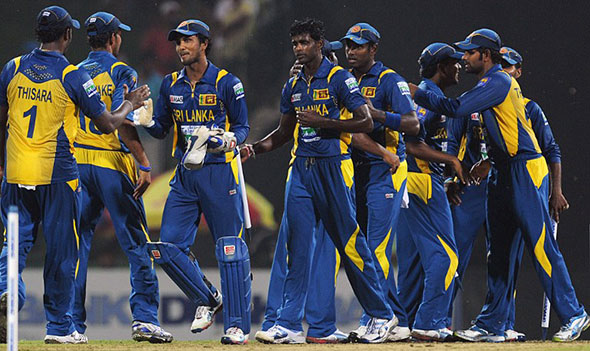 Russel Arnold responds to questions from fans in his weekly column
April 14, 2013

Cricket pundits on the island have said that the Sri Lankan team requires a psychologist. © AFP

Sri Lankan cricketers don’t need a sports psychologist. I think the Sri Lankan style of play is all about flair. Getting a psychologist involved will only stiffen the environment. The simpler life is for the players, the better they will express themselves on the field, especially considering the lifestyles and personalities of most of the players from Sri Lanka. Having more reports to fill out and conducting analysis will only stress players out. If needed, you could use one for an individual’s needs, but I don’t see the need to have a psychologist actively involved.

The chairman of selectors Sanath Jayasuriya said recently that Ramith Rambukwella can clear the ropes, but how about Farveez Mahroof? He is very good player for T20s, so why is he not getting chances? I think Rambukwella will captain Sri Lanka within the next four years, what do you thing about this? And what do you think about Rambukwella’s inclusion in the 30-man squad for the Champions Trophy? — Sanjeeve Navaneethan and Alfonso De Almeida

Maharoof is the man Sri Lanka have been looking at ever since he emerged as a schoolboy, for his fire power as a batsman and also as a very good seam bowler. He, of course, has not done his talent any justice and has more often than not frustrated fans. In his defence, he has had issues with injuries, but I do feel he could offer more and needs to be stronger mentally. If he was fit and firing on all cylinders, he would be a great addition to the squad, as he provides more options, while also adding more balance to the team as an all-rounder. Unfortunately though, there are other all-rounders who are ahead of him now and Thisara Perera is one such player. To find the right balance in the team, you need to pick players who offer something different, therefore, I guess at that this stage it’s Thisara or Maharoof. I will be very surprised if Ramith is captain in four years. He initially needs to perform at the international level before thinking of becoming captain. He has been picked in the 30-man squad because the selectors think he has something to offer and not totally on performance. The selectors do have the right to pick wild cards and they see talent in him, but from then on it comes down to performances. In the past, we saw Chamara Kapugedera picked in that manner and so was Akila Dananjaya not too long ago, but staying in the team is tougher. There is still a long way to go for Ramith. The 30-man squad really means nothing, it would be the final squad that I would be interested in.

After Tillakaratne Dilshan retires, who should partner Kushal Perera and Dimuth Karunaratne in ODIs and Tests respectively? — Yezeer Arfath

Great question. On Dimuth, I was excited about him, but he has grown to frustrate me very fast after throwing his wicket away on many occasions in the Bangladesh series. Although I’m not happy, I will stick with him. I am actually tempted to move Lahiru back to where he began his career, keeping in mind the options available in the middle order. After all, he is very solid. For the shorter form though, I feel we still have a few years left with Dilshan around, but it’s time to look for players to fill in. Munaweera just does not seem to give you that reassurance needed. Niroshan Dickwella is someone I might turn my attention to and also Shehan Jayasuriya.

Do you think Thilan Samaraweera got the farewell a player like him deserved? We saw how Australia gave Mike Hussey a farewell when he retired, but Samaraweera got nothing. please share your opinion on this. — Lahiru Fernando

You cannot plan farewells. I think decisions need to be made for the betterment of the team. If the chance presents itself, then a player could be honoured. Judging by the hectic scheduling, I don’t think there could have been anything different that could have been done for him. I would not have picked Samaraweera for the Test series against Bangladesh in order to give him a farewell. It was important to play youngsters and not waste that opportunity to blood them for a farewell.

The new selection panel went with Dinesh Chandimal as captain in T20s when his record in T20s is not great. There is no doubt that he is a good, promising player. How do you feel about his selection as T20 captain? — Chathura S. Jayawickrama

It was a good decision. When you look at the younger brigade, he is probably the fastest learner. Looking at his performances, he seems to play better under pressure and is actively involved. I think it’s prudent to assess how he handles this new leadership role and it does seem positive at this stage. Sri Lanka don’t seem to have many options to fall back on, so T20 cricket is a good way to judge if he has leadership potential.

When I first started playing for the first XI team at St. Peter’s College, I probably was the least talented. There were others who were outstanding, such as Hemal Wimalasekera, Indunil Anthony and Asanga Perera, but I probably had the most patience to hang in there. All these guys fell away a few years after leaving school. Even at school level, I would graft my way to scores and hang in there, which eventually helped me score the most runs in the season island-wide. It takes a lot more than just skill to get results.