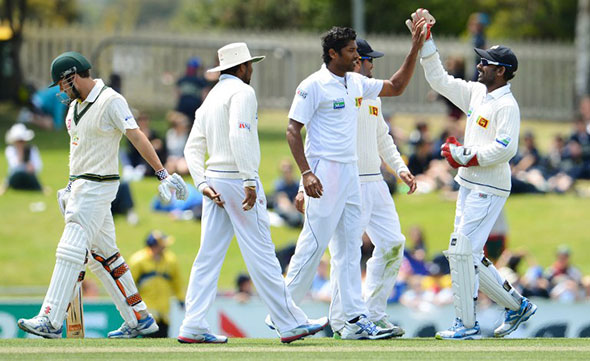 Russel Arnold responds to questions from fans in his weekly column
December 23, 2012

Will the surface at the MCG force Sri Lanka to make changes? © AFP

What is your Sri Lanka XI for the second Test at MCG? Who should be dropped and why? — Anuk Samaraweera

I would go unchanged and play the same team. There’s no reason to change the batters. Even Dimuth looked very good, but needs to kick on and try make the big scores. Sri Lanka must play their best spinner — Herath. Eranga could be the X-factor together with Welegedara who looked rusty, but got better as the game went on. Welegedera has not played in a long time, but he showed that he has the ability to produce wicket-taking balls. Kulasekara is the steady one and you need someone like him holding the attack together; you cannot attack all the time. The bowling attack needs to balanced and this side is.

What do you think about Mahela Jayawarene’s decision to announce right at the start of the tour that he will not captain Sri Lanka after the Australian tour? Should he have waited until the tour was done and he returned to Sri Lanka? And do you think the reason to announce it at the start of the tour is not in the best interests of the team, and it is more a selfish one? If Sri Lanka lost badly, he may have wanted to avoid a scenario where it would have appeared as if he stepped down because of the losses. — Lakitha Gunawardane

I don’t see anything wrong with the timing of his announcement. Mahela had stated many a time that he did not wish to lead after the Australian tour. It was always the plan, and it was expected. As far as I am concerned, the end of the Australian tour marks a fresh start for Sri Lanka, therefore, his early announcement actually helps the team prepare for the future.

Does Sri Lanka need a more experienced bowling coach? Maybe an overseas coach? Who would you recommend? — Ravishan Silva

Champaka Ramanayake has been in charge for quite awhile and has done quite a good job. However, infusing new ideas and strategies is always good. If Sri Lanka need anyone to help out, I would look no further than Chaminda Vass. Ramanayake and Vaas could actually work together and implement some sound plans, while also focusing on the quality of the talent coming through the system. Sometimes a different voice and new opinions can help, as players could get bored with the same old routine.

I am not a fan of requesting or forcing players to play. If the drive and passion is there, they will show up. Malinga has his reasons and issues for not playing Test cricket. I think it’s best that Sri Lanka move on. They must try to work with what they have. It would be good if he does play, but continuing to dwell on his return would only hold Sri Lankan cricket back. There is nothing to gain by hoping or begging a player to show up — it’s unhealthy. I am sure if it was possible, he will make a comeback.

Sky Sports recently showed a documentary where Rameez Raja said that the throwing laws were changed for Murali. I find it hard to understand how a seemingly intelligent individual like Raja can think that the rules of an international sport was changed for one man? Can you please ask Raja to clarify? And what are your thoughts on his comments? — N Munidasa

Studies into bowling actions and throwing were only initiated because of Murali, but the rules were changed to accommodate many other bowlers, as the studies concluded that many bowlers, even those who appeared to have perfect actions, were exceeding the old tolerance levels and limits.

Why is Chandika Hathurusinha rated so highly as a coach by Kumar Sangakkara and others? What’s so special about him? And what do you think about he was sacked by SLC? — Mahela Jayatilleke

Hathurusingha is a hard working individual. He has a wealth of experience, and his knowledge is second to none. When he was working for SLC, he did build a great relationship with the players, which is very important. A lot depends on the feel good factor. There were quite a few players in the A-team who made changes to their game for the better because of him. His contributions to the national team were also positive. There was an issue in communication between him and a former board official. Hathurusingha maintains that he was given permission to return early from a tour, but SLC say he was requested to finish the tour. It is claimed that Hathurusingha had disobeyed orders, which meant that his sacking was justifiable. There is no room for breach in discipline, but that was a long time ago. Forgetting, forgiving and moving on is the best way forward. There is a lot to gain for both parties and it’s the future of Sri Lankan cricket that matters at the end of the day. People do make mistakes, but that does not mean it’s the end of the road for either party.