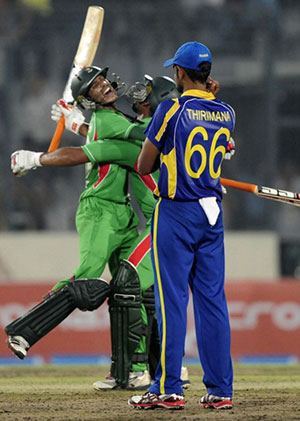 Russel Arnold responds to questions from fans in his weekly column
February 9, 2013

Sri Lanka have always held the upper hand against Bangladesh at home, but do you think the vastly improved Bangladeshis can pull off a major upset in the upcoming tour? Does Sri Lanka need to watch out, and how do you predict the tour will go? — Mohammed Iqbal

It would be a closely-fought series I feel. I have seen quite a few good Bangladeshi batsmen around and they will be hard to beat, as even their bowling is tight, although not dangerous. If Sri Lanka are not focused, they could find themselves under pressure. Even the Test matches would not be easy, as the Bangladeshi batsmen have improved and do have the skills to score more runs in these subcontinent conditions.

Do you think Thilina Kandamby has what it takes to captain Sri Lanka? What do you think of Kandamby being appointed captain? — Keerthi Premasiri

Thilina Kandamby is a quality player, but he is not who I will go to at this stage. Forget captaincy, I don’t see him fitting into the team, especially with Sri Lanka preparing for the future. Considering Sri Lanka’s schedule this year, I will blood youngsters to build for the future.

Have you seen off spinner Maduka Liyanapathirana bowl, and what is your assessment of him? At six-feet-three-inches in height, he is the tallest spinner in Sri Lanka. — Suresh Perera

His variation is a type of carrom ball that skids through and he does turn the ball. He is decent at this stage. He needs to perform and keep improving to catch the eye of the selectors.

Out of the Sri Lankans playing in the BPL this year, who have looked impressive so far? — Chrishantha Fernando

None of the Sri Lankans have been dominant in the BPL as yet. Dilshan Munaweera has been good, but surprisingly with the ball and not with the bat.

Akila Dananjaya still has a lot to learn, and he also needs to work on his fitness to play Test cricket. Some people think we should try him against Bangladesh, but isn’t it better to let him play at least two seasons of first-class cricket before introducing him to Tests? — Indika Amarakoon

Yes, I too feel that is the way forward for him. He is far from a finished article, and needs to learn the grind. For Tests, it’s Tharindu Kushal that the management have been looking at. There was a bit of interest for Akila from Big Bash teams, but he was advised to play in the domestic season in Sri Lanka instead for just that reason.

Who were you most impressed with during Sri Lanka’s tour of Australia, and why? — Dayan

Nuwan Kulasekera. He performed consistently, especially in the ODIs, and gave us the best display of swing bowling we have seen in awhile in international cricket. Dimuth Karunaratne, Lahiru Thirimanne and Dinesh Chandimal, too, for giving us hope for the future.

Did you see Bhanuka Rajapaksa batting this year in the domestic tournaments? Is he looking good? He was in bad shape with his batting form and also with his physical shape in the last SLPL. How well is he doing at the moment? Is he a possible replacement for Tillakarante Dilshan after he retires? — Praveen Samarasinghe

I have not seen any domestic cricket this season, as Sri Lanka have been on the road and so have I. Bhanuka is very talented, but I do feel he is a bit lazy. He needs to work harder on his fitness, and he also needs to make bigger scores. I’m not really sure if he can replace Dilshan, but he has a role to play for Sri Lanka in the future. He needs to become more mentally strong and determined. I think he will entertain us for sure.

Why do you think the selectors keep ignoring Kanishka Alvitigala, a really tall quicky who can bowl at 140 km/h? He would have been ideal in Australia? — Rasanga Kaushalya Samarasinghe

I don’t think he’s being ignored. Kanishka is big and can reach good speeds, but the consistency required with pace and also variations are not there. When you say 140 km/h, you must bowl consistently at that pace, and not occasionally. Pace alone will also not get a bowler anywhere. I think he needs to improve on these factors to get that break.