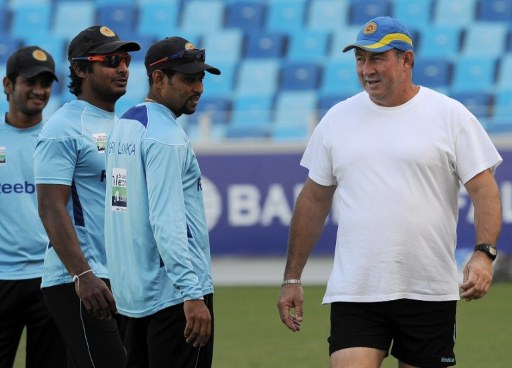 Russel Arnold responds to questions from fans in his weekly column
July 7, 2012

Geoff Marsh was sacked just three months after he was hired as coach. © AFP

What is your view on Geoff Marsh’s sacking? – Kumar Fernando

It is an episode to forget. Marsh was picked up, so I am told, when he was in Sri Lanka to watch his son make his debut when Australia were on tour. Then, to be dismissed in three months is very harsh. There was not enough time for him to make an impact, especially when you consider where Sri Lanka was at that stage. They were in a rebuilding phase and were also on tour. You should never bring about major changes when the team is on the road. Marsh needed more time to deliver results. There was never a period of two or three weeks at home for Marsh and the team to totally focus on skills.

Do you think Saeed Ajmal is the most dangerous spinner in modern-day cricket after Muttiah Muralitharan retired? – Aslam Khan

Graeme Swann comes close and does have a good record. But if I was to pick one, who is feared and batsmen struggle to pick, it is Ajmal. Sunil Narine seems to be creating havoc but we still have not seen him perform in international cricket and also in Test cricket; you have to perform over a period of time to be considered in this bracket. Ajantha Mendis started in great style but has now dropped off the radar. If you take the career stats of Swann and Ajmal, they are very close in every aspect. But in 2012 though Swann has picked up two more wickets than Ajmal. However, Ajmal’s strike-rate is much higher. The impact that Swann and Ajmal have on their teams’ fortunes too must be considered when judging. They are both very positive and attacking bowlers – it’s indeed a close call between the two but Ajmal it is for me.

Thisara is very talented and should be used in situations that suit his style of play. At this stage, I do believe Mahela Jayawardena has got it right and is utilising him well. Thisara has shown great improvement over the last year and that really excites me. His type of play also suits the type of cricket played in leagues such as the IPL and that should give him the motivation to continue to improve. I think it’s only the start for Thisara and he has a lot more to offer Sri Lanka. We can only hope he does not fade away faster than he came on to the scene.

Do you prefer a club competition or provincial tournament when it comes to our domestic cricket structure? – Senthil James

I have no preference if it is provincial or club, as long as we have one proper tournament taking place – there is no room for both. The club system has worked for us in the past. But on the long run, if the provincial system is in place and facilities in those provincial bases are improved, it will only give more opportunity to outstation cricketers to better themselves. We are a long way from there though, as those playing in the domestic game do end up moving to Colombo for job opportunities; our cricketers are only semi-professionals. A tighter club tournament will help the standard of the game.

Who is the best spinner Sri Lanka currently have and why? – Hasitha Ranawaka

Rangana Herath. It’s because of his experience and also his ability to do the basics better than anyone at this stage. He has a few variations and he just keeps turning his arm over. It’s all about the basics and consistency with him. He can bowl many overs patiently and given the chance Herath will win you matches.