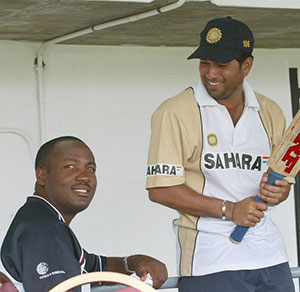 Russel Arnold responds to questions from fans in his weekly column
April 29, 2013

Who out of these three players do you consider to be the best batsman of our generation: Sachin Tendulkar, Ricky Ponting or Brian Lara? — Darren Singh

Comparing players is always tricky. What criteria do we judge them on? For Sachin to be playing for as long as he has, and to be performing at a very high standard as consistently as he has, is incredible – you can’t look past that. But, if I was to pick one, Brian Lara is a batsman I enjoy watching.

Do you think Muttiah Muralitharan became predictable and less threatening after he developed the doosra? — Manju De Zoysa

The only difference I recall is that Murali spun the off-spinner a lot less after developing the doosra and that was due to a change in his body position during delivery, but right throughout his career, with the new variations he brought in, he continued to be threatening.

Although Angelo Mathews was tipped to be the next captain for some time, do you think Sri Lanka should have ideally used a more matured player for captaincy until Mathews developed his game more? Some say that Mathews still had a long way to go before he could captain, what is your view? Do you feel the selectors could have used a more matured individual, ideally in his late 20s or early 30s, to captain the side instead of Mathews? — Viran Fernando

Ideally, yes. That would have been the best way to go about it. The selectors did tread down that path, which is why they handed captaincy to Dilshan and Mahela after Sangakkara stepped down. But after Mahela, there just was no one around who could take over, so this is probably the best way forward.

Of course, they can most certainly beat that trend. The games were all lost under different circumstances, so it’s more a case of being an unfortunate coincidence. Losses in past World Cup finals should be quickly forgotten and it must not be allowed to dominate the players’ thinking. The next World Cup will be tougher than the last few, as it will be played in the southern hemisphere, where conditions are alien to players from the sub-continent. However, the guys have shown they can perform well in those conditions on recent tours there. Sri Lanka may not be favourites, but they are certainly dark horses.

I’ve played cricket for my alma mater, St.Aloysius’ College, Galle, at all age limits and now I’m playing for my university, University of Ruhuna, and captaining the side. I also play in the premier league (division two) for Matara Sports Club. My question is on Thisara Perera, who is extremely talented and a great asset. In my opinion, he is the best all-rounder in the country so far and his batting has vastly improved, however, seeing him playing in the last couple of series, especially in the SLPL, Big Bash and IPL, I find him struggling, although he is scoring quick thirties and forties. If his main scoring shot is blocked, there is no other convincing shot to be played – he is limited. When he does connect, he hits them hard as Chris Gayle or Kieron Pollard. Thisara Perera and his batting coaches should focus their attention towards his batting more and he should find a way of scoring all around the wicket. He would then become a handful and a captain’s nightmare. Do you agree, what’s your view? — Vidula Wijesirinarayana

Do you think the Galle surface has become too batsman-friendly, and is this a bad thing? — Ranmal Prasad Perera

I believe that Galle surface we saw, in the last Test played there, was a one-off. We may not see another batsmen-friendly surface like that again at Galle.