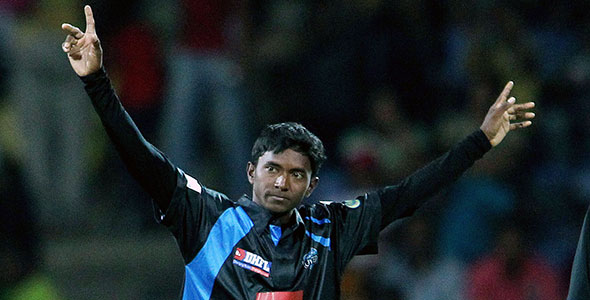 Russel Arnold responds to questions from fans in his weekly column
September 8, 2012

What is your final Sri Lanka XI for the ICC World Twenty20 2012? – Shashika Atapattu

Who is the best sledger in the Sri Lankan team you have played with and why? – Naveen Raddoluwa

We did have a few good sledgers in the side. Kumar Sangakkara takes the cake as his communication skills were the best. He was also in the best position to have a word because he was keeping wickets and quite close to the action. Sledging can often be misunderstood. What happens out there on most occasions is banter, which professional cricketers have a laugh about off the field later.

What is your view on the cancelled tour to England in 2009? Do you agree with the players who wanted to honour their IPL contracts before their national commitments? – Shanil Kuruppu

I am glad that I did not have to make a decision on this matter. It is easy to comment from where I’m at. It was not in the best interest of Sri Lanka cricket but, from a player’s point of view, players also have to think about their futures; and here was an opportunity for financial security. A cricketer’s career is limited and the IPL has proved to be a life changer for most cricketers. It is tough to look away. As a player, you do have to make the right decision for yourself, as you do not know how long you have left in the game. It could be injuries, or it could be selectors that may curtail your career. Playing cricket alone is not sufficient. Just like any other profession, financial gains are important too. It is a sad situation, but this is reality. I would like to see people handle it in a different manner if they were in that situation.

What is the white cream that our players rub all over their faces, and why do we not see teams like England and Australia wearing the same cream? – Suren Dias

It is sun protection cream (sunscreen) and all players do use it, but it probably comes down to how much you want to leave on. Some players prefer to rub it right in and others don’t.

Couple of decades back, Sri Lanka was admired for its school cricketing structure. We possessed many school cricketers who had potential to represent Sri Lanka at the highest level. But while watching the recently concluded under-19 cricket world cup, I felt that there are so many things to worry about in terms of the future of Sri Lankan cricket. Where have we gone wrong as far as school cricket is concerned? – Praveen Abeyrathne

Lately, there has been a change in the structure and schools now have to play different schools of different qualities and strengths. The stronger teams have most of their games ending by lunch on the second day. The change was done to give more opportunity to players, especially the outstation players, but the down side is that it compromises the quality on the long run. As of now, we have picked quantity over quality where school cricket is concerned.

In your opinion, who is the best batsman Sri Lanka has produced who can score on all tracks against all kinds of bowling attacks? – Shanaka Kannangara