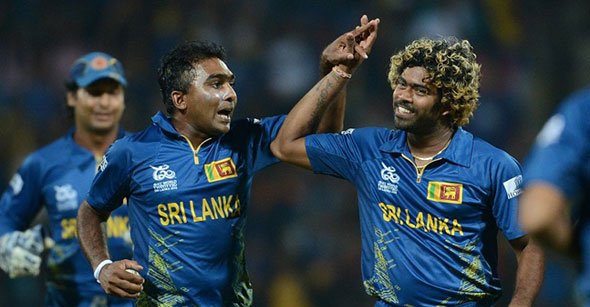 Russel Arnold responds to questions from fans in his weekly column
October 22, 2012

Lasith Malinga has faced criticism from fans and the local media after the WT20 final. © AFP

What do you think about all the criticism against Lasith Malinga after the WT20? Should we have not played Shaminda Eranga for a couple of games, at least in the South Africa game, where the wicket favoured the quicks? — Saif Marikar

Actually, I have not heard of any criticism. And that’s because, when things go wrong, I do not listen to people. There are so many views which are baseless. Yes, Marlon Samuels did take him apart, but people forget his many good performances. There’s bound to be a moment where he will look ordinary, or make a mistake. Unfortunately, it happened in the final. We see so many good players fail at different times and that’s life. If Mahela or Sanga had scored a fifty, we would have won, and bailed Malinga out from his off day. All would have been fine then. Going back to team selections, I thought the right team was picked. It’s nice if we can play everyone, and tick all the boxes, but only 11 can play. I thought the best team for the game was put on the park.

When we compare Sri Lanka and West Indies, we can see many all-rounders in both sides. Apart from Kumar Sangakkara, Mahela Jayawardene and Lahiru Thirimanne, everyone can bowl in the team. Sri Lanka played Thirimanne, who is a genuine opener in Tests, at No.7 or 8 for almost the whole WT20 tournament. When he got a chance to prove himself in the final, he miserably failed. What is the point of playing a batsmen like Thirimanne at that spot when it is well known he cannot accelerate easily? And considering Thirimanne batted well in South Africa, would you promote him to open in the Australia tour? — Arjun Gopal

He failed when everyone else failed in the same tough conditions, and he was left with too much to do. An asking rate around 10 per over on a turner means the odds are heavily against you. The top order should have stood up, and with the help of the lower order, taken Sri Lanka home. Lahiru has proven that he can handle pressure well. He actually has looked very impressive in that middle order. He has plenty of shots and rotates the strike well. He may not be a basher, but Sri Lanka need a tough cookie like him in the middle. When you think of the future, there is a case for promote him. With the batting personnel we had going into the T20 World Cup, he certainly was the right candidate for the role. It’s about creating a balance to suit the needs of your team and this is what suits Sri Lanka.

Do you think the Sri Lankan team, especially the middle order, has the discipline and mental strength required to win a major trophy? We have been amazing and consistent to get to four finals in the recent past. However, for reasons unknown, we seem to really make a mess of the final itself. At the 2007 and 2011 finals, we could say we were outplayed, but in the 2009 and 2012 WT20 finals though we choked (there’s no polite way of saying it). What do you think is going wrong? — Dimuthu Ratnayake

I believe we do have skilled and highly talented players. However, our top-order was blown away in the final. To win games, you need the top order batting through the innings, while the lower order plays a supporting role. That’s how most games are won, and it should be the same in a final too. We should not rely on the lower order to win us matches when under pressure. At times, when they do take us home, we credit the entire batting unit for getting us there, so it’s not right to crucify the lower order when things don’t work. It’s still a team game, and all players have to compliment each other. I feel the top order needs to take control. One of the top three needs to control the length of the innings. At the end of the day, we are a top-heavy line up with the understanding that the top-order has to deliver for a positive result.

My question is about the all-round ability of one of the most talented players in the current Sri Lankan team — Angelo Mathews. I know that Matthews is one of the best all-rounders with a lot of talent, but I have noticed that he generally struggles to score runs quickly when needed and waste many balls, especially in short versions of the game. On a number of occasions, he has got out quickly because of this struggle and the need to score fast. I remember players like Aravinda de Silva and Arjuna Ranatunga always found gaps in the field, and scored twos and threes when they first arrived at the crease before accelerating and hitting boundaries and sixes. Do you think that Mathews needs to fix this weakness quickly before accepting more responsibility in the team? — Pushpakumara Wijayasinghe

Angelo reads the game well, and he backs himself to catch up at the end. What really matters is the partnership you have out in the middle. How the batsmen at the other end goes about his game too must be taken into the equation. If your partner is in control, and can keep the scoreboard moving, it frees you to settle in faster. However, if runs dry up on that end, it becomes a real struggle. You will have to take chances and hope it comes off, and that too with the scoreboard ticking over and pressure mounting. Angelo does have a good game in place. Once he moves up to four or five, I think the issue will sort itself out. When Arjuna walked in it at five, it would usually be Aravinda at the crease who kept the scoreboard ticking, and it was sometimes on the back of a blistering start. So, it may seem as though some players are more or less in control than others. At the end of the day, it’s about winning the match, not about playing like or being like someone else.

How do the Sri Lankan selectors choose their bowlers from domestic teams like SSC, do they choose them based on how fast they are? What do they look at in bowlers? I would like to play for Sri Lanka in two years from now, and I can bowl 140 km/h now, do you have any tips on how I can get into the Sri Lankan team? — Himesha Kulatunge

It is not one particular attribute that they look for. They identify the ability to unsettle batsmen with either pace, control, swing or bounce. Sometimes, even the strengths and weaknesses of the other bowlers around you can help your cause. You probably need to bring something different to the table, or even compliment the make-up of the team and fit into the team plan. But the key is to develop what you are good at, and hopefully, you fit in to the team’s requirements. What I suggest is to keep playing and perform. Develop your strengths, and create a situation with your performances that you cannot be ignored or overlooked. For this, you need patience and perseverance as well.

I also think sending senior, recognised batsmen during the power-play in T20s is not a good idea. Why don’t we use bowlers as pinch hitters for the power-plays? They can bat with one senior player? For example, Mahela Jayawardene and a pinch hitter to open the batting? The role of a pinch hitter is to go out and hit (of course with some discretion). If one pinch hitter gets out within the power-play, we send another. This was done successfully in the 50-over format, so it should be more appropriate for T20s. Even if those two pinch hitters were not successful, they wouldn’t waste many deliveries. If they come off, the increase in the run-rate would help senior batsmen take their time and play. At the moment, senior batsmen cannot take risks early. And because of that, they cannot use the power play in the best way. We can use Nuwan Kulasekara and Lasith Malinga as pinch hitters. This is only for certain games depending on the score we’re chasing and pitch conditions. What do you think? — Gamini Senarath

That’s a fair comment if the situation requires it. But, ideally, you need to have your best players batting through most of the overs. The power-plays are only six overs, and it’s never easy to use pinch hitters against the harder ball. With the game being more tactical, and bowlers getting more experienced in the T20 game, it’s a tough call. In fact, I would not even send Thisara up the order, as I feel the harder ball will have more bounce and swing — it’s a big risk. And mind you, the power-play overs in the 50-over game is a much longer period. By the 10th over, the white ball will soften up, so there is no comparison to how you use a power-play in T20s and ODIs. In the 50 over game, if pinch hitters are used in the first power-play, they would come in close to the 10th over. But in T20s, it’s done and dusted.