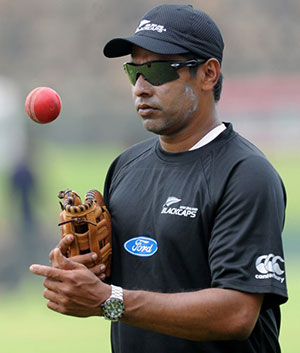 Russel Arnold responds to questions from fans in his weekly column
December 2, 2012

Chaminda Vaas worked with the New Zealand team as an assistant bowling coach, what do you think about this? Why does SLC not use him as Sri Lanka’s fast bowling coach? There is no doubt that he was our number-one fast bowler? — Hanifa

He certainly was our number-one fast bowler, and what a wonderful opportunity it was for him to work with the New Zealand team. They were very smart to pick his brains. Sri Lanka have Champaka Ramanayake, who was Vass’ bowling coach during his playing days, serving as the fast bowling coach right now. It is indeed an option that Sri Lanka should and will pursue in the near future. But leading up to this series, there was no need to chop and change coaches. It’s something that will be looked at very closely when contracts are up for renewal. Using ex-Sri Lankan players in consultancy roles has not been favoured in the past by administrators. They usually look for overseas coaches, but now I guess there are many former Sri Lankan players who are capable and can contribute. It’s something that needs to be looked at. It is changing quietly though, as most of the support staff now are locals.

Why did Sri Lanka lose the second Test again New Zealand? What are the main reasons for losing at home against a lower-ranked team that has previously struggled to beat us? — Iraj De Silva

The Sri Lankan batting just did not show up. The highest score in the series was 247. The New Zealand bowlers were good with the new ball and did get it to swing. But, as top-class batsmen, it should not have been all that difficult to survive that. In every innings, Sri Lanka were four or five down for not many. Big scores are built by the top order. When that does not happen, you find yourself under pressure. If the new ball was seen off, putting New Zealand under pressure, it would have been a lot easier. After all, the new hard ball is the best time to bat in sub continent pitches, as it will come on to the bat better unlike the soft older ball, which will hold up off the wicket. I think the mental zone the Sri Lankan players were in was not great. Many factors contributed to that, such as having one eye on the tour to Australia, being complacent and not seeing New Zealand as a threat and also mental tiredness and not having the energy to react.

When Tillakaratne Dilshan, Mahela Jayawardene, Kumar Sangakkara and Rangana Herath retire, do you think this will make a big impact, or will we have a set of players who can take over and can do the job for us? If yes, who are the four that can do it? — Muditha Kapukotuwa

We felt the same way in the past when greats such as Arjuna Ranatunga and Aravinda de Silva etc were about to retire, but along came others and Sri Lanka cricket has stayed afloat. I guess the same will happen again. Of course, players do need to be brought in and groomed. I think it should start right after the tour of Australia. As of now, I would look at Dimuth Karunaratne, Dinesh Chandimal and Lahiru Thirimanne, along with Angelo Mathews as the next batch. However, in the bowling department, I cannot name one person, as we have not seen any. A lot is being said about Tharindu Kushal — I would like to think he will step up.

Is it necessary for a selector to follow the team everywhere they go? Is this not a waste of money? A lot of other teams do not do this. — Michael Peries

Good point. I really do not see any benefit in a selector living in with the team, especially for home games. The feedback of the captain and coach should be good enough to form an opinion.

Do you think that in Test cricket Mahela Jayawardene or Tillakaratne Dilshan should bat lower in the order, as there is no point being top-heavy in the longer format? We are told that in ODIs and T20s we need to put our best batsmen right at the top, but recent Test losses suggest that this strategy is not working for us in the five-day version. — Ralston Gunawardene

The current batting order used in Test cricket, in terms of where the seniors have been batting, is the way to go. I don’t recommend changes right now, or even in Australia next month, but I do think that soon after the Australian series is done with the time is right to rethink the strategy entirely, in order to build a team for the future. Not just the batting order, but the whole squad should be looked at. When and where players need to be used should also be looked at.

Should Lasith Malinga come out of retirement to play the Test series in Australia in December? Sri Lankans do not get many opportunities to play Boxing Day Test matches in Australia. Do you think the senior players should encourage Malinga to do that? How much can one Test series his hurt his knee, he has been playing without injury issues lately? — Ruvika Nandasena

It’s a big chance he will be taking. It’s about his workload. The moment he bowls a few overs, he struggles to move again with pain in his knee. Bowling four overs in T20s or 10 overs in ODIs is not as strenuous. In Test cricket, he will need to bowl more overs than that and also back up his overs day after day. If he breaks down, that will cause problems for him and the team. There is a good chance that this situation will occur if he tries to play Test cricket again.