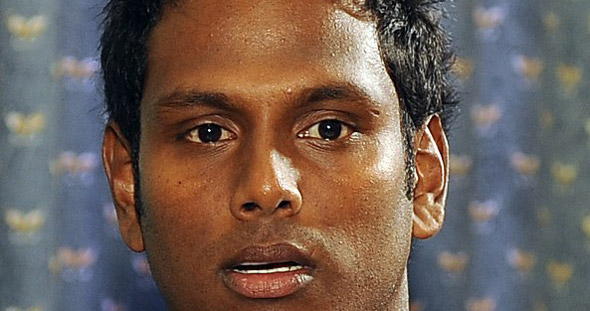 Russel Arnold responds to questions from fans in his weekly column
February 3, 2013

Russel Arnold believes Angelo Mathews should only captain the Test side. © AFP

There are rumours that Dinesh Chandimal or Thilina Kandamby will be Test captain, what is your view on this? Who is your choice for Test captain? — Lakmal

I believe one person cannot handle the wants of being a captain in all three formats. Looking at the stocks Sri Lanka have, out of the young brigade, the only person you can go to is Angelo Mathews, but I’m not sure he is ready yet. I would be seriously inclined to go with Mathews for Tests and for the shorter form with Lasith Malinga. I believe Malinga has a good cricketing mind and it might be the motivation he needs to carry on playing for Sri Lanka for longer. Sri Lanka can then reassess in probably a year and look at their options again.

Kumar Sangakkara has said in the media that he thought after he stepped down from captaincy Angelo Mathews should have taken over as captain in all formats, do you think we wasted a whole year by handing captaincy back to Mahela Jayawardene, a former captain, instead of grooming a youngster to take over? This conservative mentality is really hurting Sri Lanka. Mathews will never be ready until he is given the chance and groomed for the role, which he needs time to adjust to. — Neil Weerasekara

No, I don’t think so. I was disappointed Kumar did not want to continue, but Sri Lanka were forced to look elsewhere. Angelo was very young at the time and if Kumar did not want the weight of captaincy, why burden a young player with it and risk loosing Angelo? Even now, I feel Angelo has a lot to learn and he needs to start scoring the big hundreds to take that next step. Things worked out well and Sri Lanka now have more direction.

What do you think of Dinesh Chandimal as Test captain of Sri Lanka? Does he have what it takes to be a captain, and has he captained before? — Manjula Basnayake

Chandimal is brave, reads the game well and is a fast learner, but it’s far too early to entrust this responsibility on him. Leave him to build his game and let’s rethink and reconsider him in the future.

Is Thisara Perera being under-utilised as a batsman? He rarely gets a chance to bat under normal circumstances, as he has to come in and slog in the latter overs very often. Should he bat higher? — Sujan Warnakulasooriya

It would be good, but there are areas in his game that need improvement to do so. He has to mature and change his approach to play as a proper batsman. Batting higher up means that he cannot go out and play like he does right now, the way he is successful. The role change will require him to learn to build an innings, which is something he needs to work on. If he can make that adjustment of changing gears when required, he certainly will be a great asset. At this stage, I am not confident about pushing him up the order because where he’s at now is where he can make the biggest impact.

What’s your view on Sanath Jayasuriya’s appointment as chief selector? Have you ever thought of becoming part of the selection process yourself? — Amile Ratnasiri

Sanath has been one Sri Lanka’s best cricketers and he deserves this. That is where I draw the line. Other matters apart, give him a chance and see what he can do for Sri Lankan cricket. Yes, he is a politician now, but that’s not to say others cannot be influenced either.

We have not one but two politicians now working as selectors — one is the chairman of the selection panel and the other a full-time selector. This is a historic occasion because it has never happened before; MPs working a second job as cricket selectors of a national team. Apart from that, we also have the sports minister who gives final approval on all squad selections. While the two politicians who are selectors now are former cricketers, nothing changes the fact that they are politicians. Their previous careers as cricketers does not change who they are currently. Politicians in Sri Lanka and other poor, developing nations are world-renowned for corruption and a lack of ethics. How can Sri Lanka get out of this mess? — Joel

Not in my eyes. They were cricketers and I would know them in no other way other than as team-mates, friends and cricketers. The same would go with many others in the circles. I would think that those hanging on, those who want to be a part of cricket by any means, are the ones to be wary of. Hashan and Sanath understand the game and will be able to read situations better and identify players too. Let’s give them the respect and trust they deserve. They will serve Sri Lankan cricket well in their new roles, just as they did as players.

It is mind boggling why all-rounder Sachith Pathirana is never considered good enough to play for Sri Lanka in any of the three formats. He has 100 first-class wickets and 60 limited-overs wickets at less than five runs per over, and over 1000 runs each with the bat in both formats at an average closer to 30, so what wrong has he done to be ignored? He is just 23, and has achieved a lot already. Pathirana could be another Sanath Jayasuriya. Even at club level, coaches send him too low. He is a far better batsman to be languishing at No 8. Remember his exploits for Trinity College? In fact, he’s the most potent player to arrive from Kandy after Muttiah Muralitharan and Kumar Sangakkara during the last 20 years. — Niranjan Selvakumar

Yes, he is far better than that. It’s also up to him to work harder at his game and persuade his team that he can bat up the order and play long innings. The role he is playing at the moment is that of a bits-and-pieces cricketer and it’s tough to see him being picked for Sri Lanka at the moment. You have to specialise in one department, while being useful in another. That’s how the game is these days. I think there’s no one to blame but himself if he is continuing to play at that position at club level.