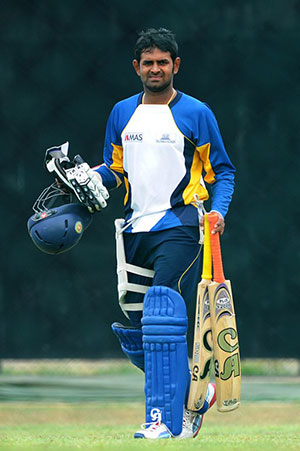 Russel Arnold responds to questions from fans in his weekly column
January 6, 2013

What did you think of Lahiru Thirimanne’s performance in Sri Lanka’s 1st innings in the third Test at Sydney? — Vishan Kalpitiya

I am very impressed with him. He did have a torrid time early, having being given out first ball, only to have DRS reverse the decision. He also took a few blows and was tested, yet he showed a great temperament. At no stage was his foot work in doubt. He batted well, which is why I still feel like kicking him for the way he got out. If he had capitalised on that start, Sri Lanka would have been in great shape. The experience of scoring an important hundred on such a big stage would have also helped him. That’s what he needs to achieve as soon as possible to make that leap forward, which even Angelo Mathews has been unable to achieve yet. But on the whole, I am excited by what I saw.

What do you think about Sri Lankan players playing football during practise sessions? Shaminda Eranga was injured before the start of the third Test when playing football, and this is not the first such injury. — Gayantha Wanniarachchi

They play football during practise sessions to keep everyone flexible and moving, but players need to be responsible in how aggressive they are. I’ve also seen freak injuries happen during other activities too — players stepping on balls and twisting their ankles. There’s no harm in playing football during practise, but the level of intensity needs be controlled.

Do you think players’ wives and families travelling with them on away tours is a good idea? Will they be able to focus on their game? — Nelum Gomez

Being away from home for a long time is not healthy. Players need that balance in life, and I do think the families need to be around, but maybe not for the whole tour. Their families are however needed to bring the players some normalcy when away from home.

Why is Ajantha Mendis not considered for the Test squad? — Madhurya J Vatsalya

Ajantha is just recovering from injury. Being fit for the shorter form and the longer form are two quite different things. He just was not match fit in time.

Why are you not in the commentary box in Australia? There isn’t a Sri Lankan voice on-air to resent and support our country. — Gayathri Jeevanantham

Channel 9 does not use guest commentators and they have not used one in many years. They did invite me though for a chat on-air prior to the start of the second day of the third Test in Sydney.

Would our young, up-and-coming players benefit from playing cricket overseas, either in Australia or England, in order to get used to conditions that help fast bowlers? Our relative lack of success in these countries has to be addressed at some point? Playing for as long as we have, and not having won a Test in Australia, is very disheartening for a country that calls itself a major Test playing nation. — Maithri Jayasuriya

I agree with you. But if you look at the time period that our domestic tournament takes place, it clashes with all other countries except England. Our players also can’t miss our domestic tournaments, but if adjustments can be made to allow some of them to play overseas, it can only benefit the whole system.