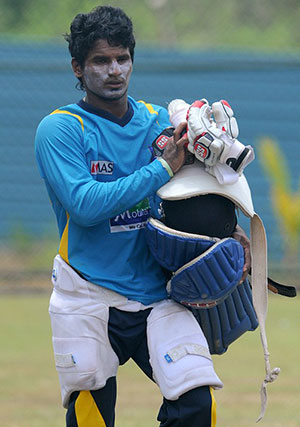 Russel Arnold responds to questions from fans in his weekly column
March 24, 2013

What do you think of Kushal Janith Perera? He has had a great first-class season and has impressed whenever he has played for Sri Lanka. — Thushara Kodagoda

Kushal is an exciting prospect. He has shots all around the wicket and he’s quick on his feet. This, along with his short stature, allows him to pounce on length and play horizontal bat-shots to deliveries that are not quite short. I was impressed with his approach in the first ODI, where he started knocking it around for singles after getting Sri Lanka off to a flier. It shows that he is a thinking cricketer.

Ajantha Mendis’ career seems to be going through a lot of ups and downs and his performances seem to be very erratic. Does he have a future in the Test team? Is our coaching staff and management failing him, or is this on him? — Theekshana Somaratna

The skills that Ajantha has cannot be coached. He could be helped along with the mental aspects and tactical side of things, but I don’t think the coaches can be blamed. To be honest, I will not pick him for the Test team again, as I feel he has lost the zip with his carrom ball, which was what his mystery was built around. It is also a very hard skill and those fingers need to be very strong to keep doing what he does. It could be wear and tear, which may be why he’s missing that zip. He needs to keep working on variations and ways to get better and he will of course need guidance too. He was trying to bowl as a conventional spinner down in Galle, which just did not suit him.

What do you think about Sri Lanka’s ODI squad for the series against Bangladesh? Were there any players you would have liked to see that did not make it? — Troy Matthews

I think the selectors have picked a well balanced squad, but just as in the Test series, we might not see all of the young players getting an opportunity to play. They will however gain valuable experience from being with the team during the series. The youngsters who were picked did deserve attention, so the selectors made a fair call by including them.

When I play the cover drive, the ball always gets lofted in the air. What am I doing wrong and how can I keep the ball along the ground? — Venura Isuranga

There could be a number of reasons why this may be happening. Assuming that it has nothing to do with the pitch/playing surface, it could be a case of your weight not being transferred forward and you being on the back foot, or your back leg might be bent too much, which could be holding your weight back. Get your front foot slightly away from the direct line/trajectory of the ball and place it besides the line of the ball instead, so you have room to swing the bat through and drive the ball freely. You should be leaning in to the stroke, leading with your shoulder, with your head close to your front shoulder, and try to play the ball as late as possible. Practise this in your head and during shadow batting to get the technique right and then focus on watching the ball and playing the stroke correctly when batting.

Why was DRS not used during the Test series between Sri Lanka and Bangladesh? There were many poor decisions made by umpires. — MT Pathiraja

DRS technology was not utilised because of the cost.