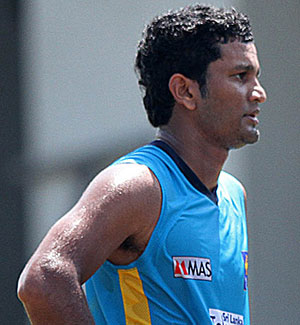 Russel Arnold responds to questions from fans in his weekly column
November 4, 2012

Since there is an empty slot for an opener in the Test squad, don’t you think Dinesh Chandimal should be considered for this spot for the tour to Australia next month, looking at how well he performed in the last CB Series? I’d like to know your take on this. — Tiasha Fernando

That was in ODIs. Opening in Test cricket and batting at No. 4 in ODIs is completely different. He did show a lot of class and great temperament in that series. To open in Australia, I would think Paranavitana is the front runner, as it looks like he will open against New Zealand. I doubt that there will be drastic changes to the team from now until the tour of Australia. My pick as an opener would be Dimuth Karunaratne.

We keep talking about giving our next generation of players enough experience for the next World Cup and ready for the time when Mahela Jayawardene, Tillakaratne Dilshan and Kumar Sangakkara retire. But I never see that happening. Almost in every series Dilshan, Sangakkara and Jayawardene play the full series, while young players like Lahiru Thirimanne are left at the bottom of the order and Chandimal and Dilshan Munaweera are left to warm the benches. Recently, New Zealand toured India and a common sight throughout the series for India was to use their younger players and rest the big guns. I honestly don’t see Dilshan and Jayawardene playing until 2015, so don’t you think it’s high time we started doing something about this? — Minendra Sarathchandra

It’s not easy to go out there and be competitive without all your seniors, but its something that needs to be managed. We did see in the recent series against New Zealand, Dilshan was rested for the final two ODIs and the younger guys did get a bigger role. We also did see Mahela and Sanga move down the order in the 5th ODI. Now that should happen more often. I suspect with a tour to Australia next, and knowing that the conditions there are always tough for Sri Lanka, we may not see it happen, as it’s a tour we need to be at our very best in, in order to compete with the Aussies. You may see it happening more often after that tour.

Who do you think is a replacement for Sangakkara when he retires? Is it Chandimal or Karunaratne because both of them are doing well. — Muditha Kapukotuwa

Sangakkara cannot be replaced, just like how Murali, Vaas and Jayasuriya are irreplaceable. If we keep looking for their replacements, we will never find them. The focus should be on picking the best players we have, and using them according to their strengths. We will also be adding a lot of pressure on these boys if we judge them by the performances and accomplishments of past greats. Good players will come. In order to get the best result, the team composition should be tweaked around. The names you mention should feature in a big way in the Sri Lankan team in the near future. Dimuth can probably open, Thirimanne at No. 3 and Chandimal at No. 4 is a good way forward.

When he retired recently, Chinthaka Jayasinghe said that Sri Lanka’s domestic premier tournaments were pointless because Ashantha de Mel has continued to ignore players who do well in domestic cricket for nearly 10 years. I believe the selectors have displayed tardiness and are wasting a lot of talent. How can we make sure we have a better selection process? — Susil K.

I don’t know if that view is entirely accurate. It is true that there have been occasions when talent was overlooked and mistakes were made, but I can’t recall a single player who stood out consistently at the domestic level and failed to be selected. Doing well at domestic level in Sri Lanka is also insufficient to judge how well a player will do in international cricket. Our domestic cricket is not of a high standard. Unlike other countries, there is a substantial difference in the quality of Sri Lanka’s first-class cricket when compared to international cricket. Take a look at Dilshan Munaweera for example. He looked good at the SLPL, but was all at sea a few weeks later at the highest level against bowlers of a higher quality. He is of course young and has time on his side. He is a player Sri Lanka can invest in for the future. At the domestic level, batsmen score most of their runs against spinners, but at the top level they have to cope with good pace attacks. How a batsmen deals with fast bowling should also be considered. At the end of the day, if your performances are good and you are consistent you will be hard to ignore.

The ICC has introduced new playing rules. What procedure is followed to bring new rules into effect, do the cricket boards of countries have any say? If so, why is it that the boards from the subcontinent have agreed to some of these changes, especially the two new balls used at either end and allowing only four fielders in the outfield outside of power-plays, as it is a clear disadvantage to them and any team that relies on spin? Is there any way these rules can be removed now? — Sulaimaan Yusuf

The process is pretty simple. The cricket committee comes up with these suggestions, which the executive committee of the ICC approves. There is no process in place for others to have a say, but different voices can influence a mind though.