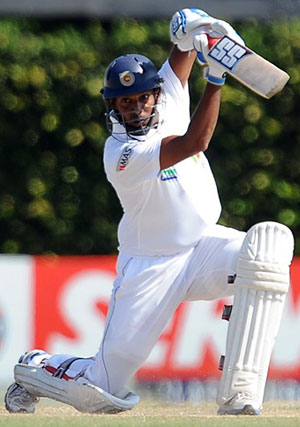 Russel Arnold responds to questions from fans in his weekly column
March 16, 2013

Did Test specialist Thilan Samaraweera retire at the right time? His decision to retire was a sudden one. It came after he was not selected for the first Test against Bangladesh, given a low-paying ‘special contract’ and because of the fact that Sri Lanka have postponed most of the Test matches for this year. Therefore, it is not a decision he had planned to make. What is your view of his retirement and the events surrounding it? — Firaz

Looking forward to the future and if I was decision-maker, I would have moved on as well. I see this as a good time to blood youngsters for the future and a time to make tough decisions to achieve that. I do feel it was the right time, regardless of whatever other circumstances that may have led to it. If I want to be critical of the situation, I could only say that I would not have included him in the squad as replacement for Mahela, if I was not going to play him. In the selectors’ defence, you can argue that with Sangakkara being injured prior to the series and not having played much cricket of late, maybe they needed some cover. It’s tough for Samaraweera, but it was the right time.

I have noticed Sri Lankan players are wearing worn out and damaged caps. It is very poor in condition. What is the reason for it? Is it because the Sri Lanka cricket board is bankrupt, so this has affected to their clothing materials as well? — Jaliya Munasingha

In the past, Sri Lankan players were given a cap for every series, but of late – probably in the early 2000s – the practice of handing just one cap, to make it special, was employed. This is the case with many other countries as well. The heat, the sweat and the sun burning down on players in Sri Lanka has more of an affect on caps than in other parts of the world.

Do you think Bangladesh’s good batting performance in their first innings, in the first Test at Galle, was because the pitch was good for batting? Rangana Herath is a world-class spinner who should be able to trouble Bangladeshi batsmen on any surface, but they handled him and other bowlers well. Is it the pitch or a much-improved Bangladesh batting that gave Mushfiqur’s men their first draw in Sri Lanka? — Gayan

It’s a combination of factors that worked for them. It was certainly not a pitch that bowlers could be judged on. The notion that bowlers should trouble batsmen on any surface is not accurate. There are instances in the course of any game that bowlers will not be effective no matter how skilled they are. It’s not totally due to a lack of skill or ability. The Bangladeshis showed that they have the determination and discipline to apply themselves to get the results they wanted. The shots on display by their batsmen were good as any you would see.

It is election time at the cricket board again and we see the same individuals running for the same posts again. Why is that? Why are we unable to get educated and qualified professionals competing for these important posts in the board? — Graham de Kretser

I can hardly remember anyone who came in with a clean reputation and leave with the same. It’s a tough place to be, and you’re in the limelight all the time. I see every decision being criticised, with no practical solutions put forward by those finding fault. That will always be the case, I guess. This makes SLC a tough place to be in. There are educated professionals around, but what is the qualification you are after? The moment you step in there, one automatically become a villain in the eyes of the public.

What do you think of Kithuruwan Vithanage’s first Test knock? — Amal Ratnayake

He did what was required and showed confidence and a wide array of strokes, but we cannot forget that he was not challenged in any way, so it was not a real test. He has a lot to learn, including learning about the application required to construct a long Test innings under pressure. Once he got going, he looked like he wanted play a shot-a-ball and perished trying to hit the cover off the ball. He is something to work with for sure and I see him as a positive addition.

Do you think Bangladesh has what it takes to pull off a surprise victory in this Test series? — Iqbal Ahmed

If Sri Lanka do lose the series, it will be down to their own errors. While Bangladesh have the fight and skills to draw again, they need better bowlers to take 20 wickets to win a Test match.

What is your opinion on the Galle wicket for the first Test against Bangladesh? — K Fernando

It was an unusual, lifeless pitch and it took away whatever contest there could have been between bat and ball.