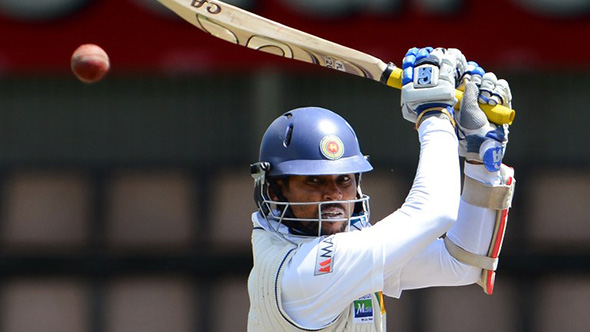 Russel Arnold responds to questions from fans in his weekly column
December 16, 2012

Tillakaratne Dilshan made 147 in the first Test against Australia. © AFP

Is Tillakaratne Dilshan planning to retire from Test cricket after the series against Australia? — Roshan Cooray

Dilshan is totally focussed on this tour — he has demonstrated it in his knock in the first innings. He is still working hard at his game, and he played a very solid innings unlike what I have seen of him in the past. The way his bat approached and met the ball during his century in the first Test was a clear indication of his commitment and dedication. His bat came down very straight, which is different from his usual game. In the past, he would look to hit a straight ball to cover, leaving a gap between bat and pad for in-swingers to creep through the gate. He has not considered retirement from the game at this point, and any thoughts about his future will only be thought about after this tour.

I think we will soon need not one but two new Test openers. If Dimuth Karunaratne is one, who should the other be? Amongst the young batsmen in Sri Lanka who have not still been selected for the national team, who are you most excited about? — Theekshana Somaratna

You are spot on when you say we need two openers. I would look no further than Lahiru Thirimanne.

The Channel 9 commentators were critical of Mahela Jayawardene’s negative tactics and his regular use of a deep point fielder, which gave Australian batsmen plenty of gaps to work the singles and get their eye in, during their first innings in the first Test in Hobart. We have seen Jayawardene, as well as former captain Kumar Sangakkara, do this when on tour in India and against sides who can score 500-600 runs easily. We have also seen Arjuna Ranatunga resort to such defensive measures before Muttiah Muralitharan and Chaminda Vaas became experienced campaigners. Even in his prime, Muralitharan preferred to have deep fielders, even on occasions when he was on top. Why do Sri Lankans prefer to take a cautious and negative approach, preferring to be safe than sorry? You would never see a Sri Lankan captain declaring the way Michael Clarke did on day two of the first Test in Hobart, even if they had the world’s best bowling attack. This negativity I feel is ingrained in the Sri Lankan psyche – do you agree? What do you think of my observation, and do you feel that Jayawardene should have forced Australia to take more chances and take risks to hit boundaries, or you see nothing wrong with that negative mentality? — Ananda Padmakumara

Michael Clarke did the same when Australia were on top. It has turned out to be a favoured position for many captains just as a bit of protection, and also as a method of stopping boundaries to frustrate batsmen. In contrast, I would use that fielder in the circle to a new batsman, and try to capitalise on his nerves early. However, some see it as baiting the batsman, trying to get him to push into that gap and play away from the body to induce an edge. You also need to understand and take into consideration where the team is at right now. Sri Lanka have never been very dominant with the ball, and have not had bowlers who scare or rush batsmen, so it’s more a waiting game — they need to induce mistakes. You do have to play with what you have, not dream of being another team. On Jayawardene’s tactics, by doing what he has done, he goes into the fourth day not too far behind in a quest to save, or even win, this Test match. If Australia had scored faster and got to 500 or 550, Sri Lanka would have gone into day four down and out. It is in fact a three-Test series, and if you cannot win you try to not fall too far behind. Sri Lanka does not have a team that can just blast Australia out, so you need to be smart, hang in there and capitalise on your opportunities. With Murali, he utilised a field that suited him. He was comfortable with it. Murali had catchers around the bat and deep fielders, but it was tough working Murali around and into those gaps. Thumping him to the deep became an easier option for batsmen. The field was set to get the batsman doing the tough thing. With the gaps in the in-field, batsmen tried to work him away, but Murali was a genius with the ball. They would only end up nicking it behind or caught bat-pad by the close catchers. The key is to stay patient. On the slow pitches in Sri Lanka, this was the way to go. Deep fielders are are not always defensive. Good shots for no runs can play tricks on a batsman’s mind and lead to a wicket.

What do you think of Mahela Jayawardene’s decision to step down from captaincy after the tour of Australia? Do you think Angelo Mathews is ready to take over? — Naveen Abeygunawardene

It’s a good move. Sri Lanka do need to look to the future right after the Aussie tour, and give more opportunities to the youngsters to play major roles, while a couple of the seniors are still around. This way, the youngsters will learn faster and we will have more direction at the end of next year. The 2013 schedule will not be hectic and demanding. Therefore, a new captain taking over now does makes a lot of sense. Angelo is showing a great deal of maturity. It is reflected in the number of innings he has played under pressure during the last few months. The time is right for him.

If Dimuth Karunanaratne fails miserably in the first two Tests, should the selectors give Tharanga Paranavitana a chance, or do you prefer to see Karunanaratne opening right throughout the series? — Mahes Fonseka

I would like to see Dimuth not only open through this series, but well into the future as well. Judging by what we saw in the first innings, I think he has the goods and will impress.

If Sri Lanka lose the Test series in Australia 3-0, how will it affect our Test rankings? Do you see a time in the near future where we will slide down the rankings below New Zealand, and maybe even below Bangladesh? — MJ Nasur

Sri Lanka will stay at number six, but the gap between Sri Lanka and West Indies narrows down to just one point if that happens. I doubt Sri Lanka will slide any further down in the near future, as the schedule will not allow it. However, it’s time that we did bring in new blood and we prepared for the future.

Do you agree that Sri Lanka is a team on the decline? We have very few up-and-coming talent that is truly world class, we have an administration that is bankrupt, corrupt and focused on making money to break even every month, and not focused on developing our cricket to take it to a higher standard. Most of the fans feel that the future is bleak, do you? — Ricardo Winston

If we do not act now, the future may well be bleak. I do think there is plenty of talent in Sri Lanka, but that talent needs to be introduced now and prepared for the future. Without playing these new players, giving them more exposure and responsibility, we will never know. Even on the other fronts you mentioned, there are decisions to be made. Yes, a lot more money should go to development and A-team tours etc. When the likes of Arjuna Ranatunga and Aravinda de Silva were retiring we felt the same, but the team found fresh feet. I am confident there will be others who will take Sri Lanka forward, but we need to act now on all fronts.