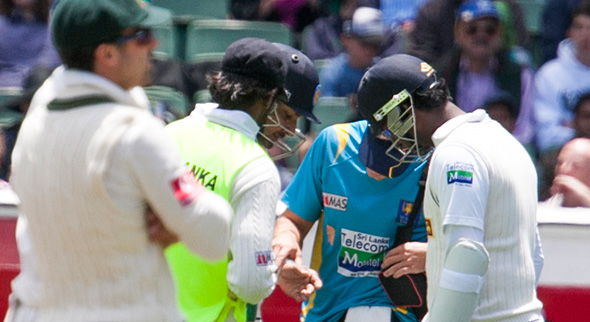 Russel Arnold responds to questions from fans in his weekly column
December 29, 2012

Kumar Sangakkara inspects his hand after being hit by delivery from Mitchell Johnson. © Asanka Brendon Ratnayake

According to Mahela Jayawardene’s Test match stats, he has not made a 50 in his last 26 innings away from home and most of his Test centuries have come on placid tracks in Sri Lanka. He clearly struggles away from Asia and thrives on wickets that don’t offer too much pace, bounce or movement. What do you think is the problem — is it his technique or is it a mental issue? How can he rectify this problem? Should he not move down the order and play the role Arjuna Ranatunga played in the lower middle-order instead of batting at four? — Tharindu Jayantha

I put his recent dip in form away from home down to a hectic schedule. The players appear to lack the extra sharpness required to battle it out in alien conditions due to continuously playing. He is such a class act. He plays in all formats, and is in high demand at the IPL, which keeps him very busy year-round. Preparation plays a big role, and having time to prepare makes a player more sharp and focused in the middle. He does well at home because he’s been making runs in Sri Lanka for decades, and knows the conditions inside out. As you suggested, moving down the order to let a younger guy grow into the role at No. 4 is certainly a good suggestion. Mahela needs to manage the amount of cricket he is playing, and that means he may need to give up playing T20s, ODIs or Tests.

Do you think playing a lot of T20s and ODIs is hurting Sri Lanka’s performance in the Test arena? — Michael Diasz

Yes, it does have an impact. The rewards are a distraction. The way forward is to accept this fact and try and work around it by building a bigger squad and using players accordingly. The skills required are different too. The discipline required for the grind in a five-day game is tough to cultivate. The players need time away from the game to prepare and freshen up, so the packed calendar does make it harder for them to prepare mentally for Test cricket.

What is Kumar Sangakkara’s injury? Why did he need surgery? How long is he out for? — Ruwani Kaluperuma

Kumar has a compound fracture, also known as an open fracture, in his index finger on his left hand. This type of fracture tends to break skin and sometimes involves multiple broken bones, which requires surgery and minimum two months of recovery time.

What do you think of Sri Lanka’s batting performance in their first innings on the first day of the Boxing Day Test against Australia? Where did they go wrong? What happened? — Malaka Gajanayaka

They appeared to have been caught on the wrong foot. The effort it took for them to hang in there and save the Test in Hobart would have been draining. Then, when they came to Melbourne and won the toss on what looked like a really good pitch to bat on, it may have led them to take things too lightly. The basic processes of working hard to get a good score on the board, leaving the ball, showing patience and defending with a straight bat were all forgotten. That was a huge blunder.

Who is the selector currently on tour with the team in Australia? — Anslem

Don Anurasiri is the selector on tour.

Jeevan Mendis was dropped by the Sydney Sixers in their last match on December 26. Is this the first time a foreign import has been dropped in the BBL? — Vikram G.

Mendis was only signed for four games. Michael Lumb has returned after England’s series against India to take up his usual spot in the Sixers’ line-up.

Do you agree that genuine positive changes and actual development of cricket can only happen if this current administration at SLC is replaced with highly qualified professionals who have no connection to this current government and the government reimburses the cricket board for constructing the Mahinda Rajapaksa stadium in Hambantota, which has left the board bankrupt? — Sunil Jayalath

For as long as I can remember, issues have existed at the board, so you cannot blame one group. Whoever is in charge, ownership needs to be taken, and they must all work for a common goal. Changing personnel is not going to be the answer. I am in no position to comment on board finances, as I don’t know the numbers, and I can’t comment on speculation.