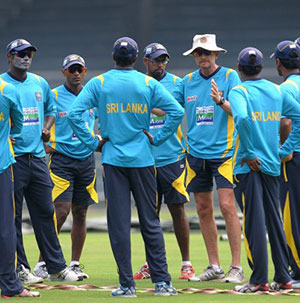 Russel Arnold responds to questions from fans in his weekly column
April 6, 2013

Are you in favour of different teams for different formats? Does a country like Sri Lanka have enough depth for such an experiment? — Theekshana Somaratna

With the amount of cricket being played, I think the way forward is to have specialists in different formats. This will ensure that the skills will be of high standard and you will also have fresh players on the park. It’s not only the depth of talent in Sri Lanka that is an issue, when it comes to having different teams for different formats, but the financial perks of the shorter form game will also not allow this.

How do you think Sri Lanka will fare at the Champions Trophy, especially against teams that play well in English conditions? — Osanda Gunaratna

I think Sri Lanka will compete well, although you cannot term them as favourites. The recent performances in Australia should give them the confidence and belief needed for them to realise they have what it takes to compete in alien conditions, especially in the short form. I am confident that they will make the semi-final stages.

A couple of years back, Bhanuka Rajapaksa was considered the next Sri Lankan batting superstar, even ahead of the likes of Kushal Janith Perera and Kithuruwan Vithanage. Now though, he’s struggling even at the domestic level. What do you think is the problem and why has he not made it to the Sri Lankan squad? — John Denovan

As you grow older, you do have to work harder. There are some who really mature late in cricketing terms. Sangakkara, unlike Mahela, was not identified as a schoolboy cricketer and is one such example. A player’s work ethic and desire to excel plays a big part too. There are no guarantees in life, but the idea is to lift your game and your skills further, while being mentally strong to cope with the ups and downs. Of course, unlike school cricket, first-class cricket is more challenging. The good news though is that it’s not too late for Bhanuka and he can still make it and entertain.

Thilina Kandamby has scored a triple-century recently in the premier league first-class tournament, should he be included in the Sri Lankan squad immediately? What do you think about his innings? — Thilan Dahanayake

All SSC needed was a draw to progress to the final and the good batting surface at the SSC obviously gave him the opportunity to bat for so long. The Tamil Union bowling included Lakmal, Welegedera and Herath, which means it was one of the better attacks going around. It is no mean feat scoring 340, but it does not mean you deserve an immediate place in the national squad. Over the years, I have considered him as one of the better players going around and its unfortunate he has not made it as yet. But at 31, he still has a few years of cricket in him. Looking at Sri Lanka’s plan for the future, I also don’t see him fitting in right away. Who do you leave out?

What do you think of Sri Lankan players being banned and prevented from playing in matches in Chennai at this year’s IPL? — RP Ravikumar

It is disappointing, as I did not think politics will take its toll on cricket.

With the SLC election coming up, who is your preference for the post of president of Sri Lanka Cricket? — Asanka Prasanna

With the many recent developments and several candidates being deemed ineligible to contest, It’s hard to even tell right now who will be contesting, which is why I don’t have a preference, but I only hope whoever takes over will make sure Sri Lankan cricket heads in the right direction.