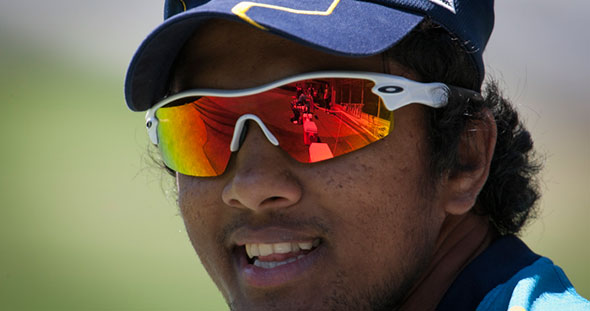 Russel Arnold responds to questions from fans in his weekly column
January 13, 2013

If Angelo Mathews takes over as captain after this series, who should be vice-captain? — Shenali Mendis

Dinesh Chandimal will make a good vice-captain. He comes across as being brave, and seems to read the game well, just as he showed in that third Test. Out of the youngsters, he looks like the fastest learner. Chandimal will also be behind the stumps, which means he can read the angles in the field well. He is vocal behind the stumps, and is always encouraging his mates. Easily the best choice for me.

Which players should Australia watch out for in the Sri Lankan side in the ODI series? — Peter Watson

Watch out for Ajantha Mendis, Dinesh Chandimal and Akila Dananjaya if he plays.

In your days as an international player for Sri Lanka, during training session at the nets, did bowlers ever threaten to bowl bouncers at the batsman? Doesn’t it expose them to the threat of injuries during training? I often find it difficult to find the courage to bowl a bouncer at training to my fellow team-mates. How did the training sessions work at international level for Sri Lanka? Did they bowl consistent bouncers, and how did batsman feel about it because we all know even the best pullers and hookers can miss a good bouncer? — Kusal

Bouncers were never welcome in the nets. At training, the pitches are mostly of half length, and such bowling is very difficult to pick up.There were short stuff hurled down on occasions, but more often than not the bowlers would end up in the bad books of their team-mates.

Considering the fact that fast bowlers were expensive at SCG, the nature of the SCG wicket, the amount of overs Tillakaratne Dilshan bowled and the number of left-handers in the Australia side, do you think Suraj Randiv should have played in the Sydney Test match instead of a fast bowler? — Sujan Warnakulasooriya

Even up until the coin was tossed, the team combination looked fine. No one could have predicted that they would bowl so poorly, and that the pitch would crumble.Yet, if Sri Lanka batted slightly better, they could still have won that Test.

Are there any players who were not picked, but you would have liked to see in the Sri Lankan ODI squad currently in Australia? — Janith

Not really. However, I would like to see Angelo Perera there soon.

How much of Sri Lanka’s issues in Australia is a lack of preparation? If they played several tour games and had time to get used to conditions before Test series, would it have averted a 3-0 whitewash? — Rookantha Peiris

Lack of preparation has always been an issue, but with schedules these days it’s unlikely to change. More time would certainly help the players get used to conditions, and help them make the needed adjustments to their game, both skill-wise and mentally too.