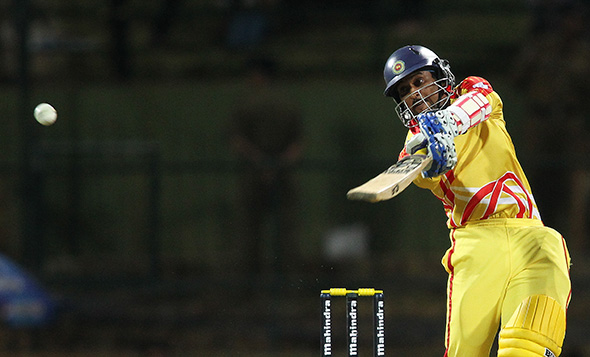 Russel Arnold responds to questions from fans in his weekly column
August 18, 2012

At this stage of the SLPL tournament, which team are favourites to win in your book? – PJ Wathsala

All teams are quite evenly balanced, and that’s what a draft can do as opposed to an auction. At an auction, if you have money you could go buy the best players. But in a draft, you just pick who is available to you. Nagenahira Nagas and Uva Next look good, but I will go for Basnahira Cricket Dundee.

Why do you think there is a low turn-out for SLPL matches in Colombo? – Pradeepraj Ramasingham

It’s better than what I expected. We did get about 10,000 spectators in, which by Sri Lankan standards is good. The R. Premadasa Stadium is massive and holds 35,000, so even if you get 20,000 it still can look very empty. Nevertheless, for the SLPL to be a success we need everyone to back it. Therefore, more fans need to show up. If we can make it a success it will be to everybody’s advantage, not just for players. There will be many more opportunities around too. As of now, only a couple of established cricketers travel around the world playing and earning, but what about the others? This is a good opportunity for all professional cricketers, coaches and others too, which is why I think we should all get behind it and support it.

What do you think of this whole media onslaught on Chamara Kapugedera? He never got the backing that has been given to Lahiru Thirimanne and Dinesh Chandimal in the early part of his career. His best run was at number four all in one year when Kumar Sangakkara opened with Sanath Jayasuriya some years back. Do you think he hasn’t been given a fair run in terms of position not opportunities? – Hatem Rajabdeen

There’s no Sympathy from me. We are talking about professional sport, and professional athletes do need to deliver. I do think he was given plenty opportunities, but he never did take his chances. I thought he could have been played in the T20 versus India, so he gets another hit after the fifth ODI. But, other than that, I got no issues. It is not all about Kapugedera, there are other youngsters who are waiting for an opportunity too. It’s not all about talent, but mental steel too. If he can get it together, he will make his way back in by scoring runs. Gone are the days where you could pick him saying: “Here is potential”. Thirimanne and Chandimal have been scoring, and they keep impressing all the while. I would be patient and bear with Chandimal, as there are signs he has got the attitude to deliver. You cannot pick many guys on potential alone. But, at this stage, the player with potential I would pick is Chandimal.

Can Sri Lanka win the WT20 2012? I personally doubt we can because we are losing home games more regularly now than ever before. What is your final playing XI for the WT20? – Sithum Samaraweera

The team would need to believe so. It can only happen if Sri Lanka put on their ‘A game’ consistently during the tournament. Also, you must remember that we have to play teams who often struggle in Sri Lankan conditions, so that gives us more of a chance of progressing. As in the World Cup last year, our real test would come against the other sub-continental teams. The time for teams to recover in the T20 format is minimal. Therefore, starting strong – even against Zimbabwe – is important. The pitch in Hambantota is hard to plan for, and the last thing you need is to find yourself under pressure and having to chase games. My XI at this stage (but it could change according to the conditions) is as follows: TM Dilshan, Mahela Jayawardene, Kumar Sangakkara, Angelo Mathews, Lahiru Thirimanne, Dinesh Chandimal, Jeewan Mendis, Thisara Perera, Nuwan Kulasekara, Lasith Malinga, Ajantha Mendis.

I don’t understand why Sanath Jayasuriya is still playing for SLPL in his 40s, when a youngster could have been given the opportunity. Sri Lankan Cricket needs to focus on young blood or else it would be tough to be successful in all three formats. What do you think? – Shabry Mohamed

Sanath is still enjoying his cricket. It’s also up to the franchises to see value in players, and he was picked up at the draft by Sangakkara and under no pressure from anybody. Any player could get there name in, but being picked is a different story. On the other hand, tournaments like this do need big players and big names too – that’s a reason why you see marquee players being brought in. At the end of the day, there is nothing called good or bad publicity – publicity is publicity; and Sanath does provide talking points and generate interest.