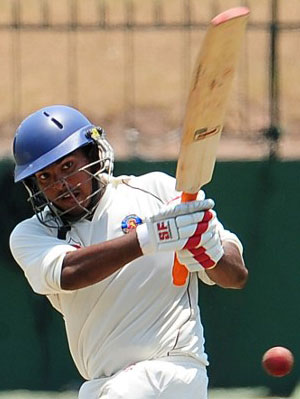 Russel Arnold responds to questions from fans in his weekly column
January 27, 2013

What is so special about Angelo Perera? What are his strengths and weaknesses? Some say he is weak against fast bowling and only good against spinners? — Suresh Perera

He is an attacking player with shots all around the wicket. To add to that, Angelo is also a very good fielder. I had that impression too, that he was weak against the quicks, but he has improved and matured as a player and person. He has a great head on his shoulders. He has been improving over the last few years and his performances show it. He is definitely one of the better talents going around and deserves a look at.

Many feel that Lahiru Thirimanne does not have the range of strokes and power for T20 cricket and his place in the T20 team should go to Angelo Perera. While Thirimanne is ideal for Tests and ODIs, the time he takes to get into top gear is not suited for the fast-paced shortest version. A case in point is his century in the Adelaide ODI — first 50 off 83 balls and second 50 off 51 balls. Do you agree that Perera for Thirimanne in T20s is the way to go? — Joshua Wright

I believe there is room for both. Thirimanne might not be an out-and-out basher, but there is a role for players like him. There will be many a time when a hard worker is needed to tough it out and see the side through. You also need players who compliment each other. He played according to the match situation in Adelaide and I really don’t think that one innings should be used to label him. I have also seen him play some blinders, with quick-fire runs scored when required. Remember the T20 World Cup last year?

I have not seen Tharindu Kaushal bowling, what kind of off spinner is he? Can you give us more details about him? — Praveen

Tharindu Kaushal is more conventional and orthodox than most others we see going around in Sri Lankan cricket. He is tall and turns the ball quite a long way. He has impressed at under-19 level and the feedback is that he is the man for the long haul, rather than the flatter, quicker, run-saving short form spinner. A graduate of the Foundation of Goodness South Cricket Academy, he was picked ahead of Akila Dananjaya for the under-19 World Cup recently. Only time will tell how he adjusts to first-class cricket and the needs and rewards of top-level cricket. But the signs are good.

Should Sri Lanka have two captains — one for ODIs and T20s and another for Tests? If yes, who would you pick as the two captains and why? — Moni

I would like to see not only captains, but even the players being defined roles, or even assigned formats, which is the way forward. For this to happen, we need to initially identify a larger pool of players. We really don’t have that luxury at the moment. We are struggling to get the next generation together and the stocks are thin. Yes, down the line someday. But at this stage, the priority is to find the right XI. Until then, I cannot name any players.

Is it Russel or Russell? Are you Russel with the single ‘L’ or the conventional Russell with the double ‘L’? — Vijay Navaratnam

I really don’t know how it happened, but it’s Russel with one ‘L’.

Is it true that the player who won Cricketer of the Tournament in last year’s SLPL has not yet received his award from sponsors Mahindra? — Malik Perera

My understanding is that the award has been ready for collection for quite awhile now, but it has not been collected due to the winner wanting certain benefits. These extra benefits are outside the sponsor’s or the organisers’ control.

Does Niroshan Dikwella deserves an ODI call up? — Shashika Atapattu

Based on just one season of club cricket? He has been good and outstanding at school level, but not upto expectations at the Under-19 level and he is still new at the club level. You can pick him as a wild card, just as we did with Akila, but you cannot say that his selection was earned or deserved. You also cannot accommodate all wild cards. He has plenty of time and I will let him develop. He needs a few more seasons under his belt and we should be looking for consistent performances from him.