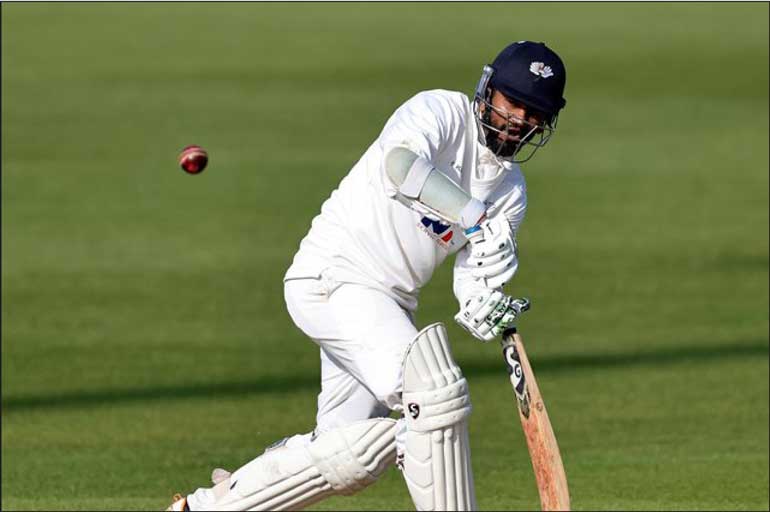 For Sri Lanka Test captain Dimuth Karunaratne the short time he spent with Yorkshire in the English County Championships has brought him a wealth of information which he intends to put to good use to enhance his international cricket career as well as impart the knowledge he gained of English conditions to his Sri Lankan teammates.

Karunaratne was signed by Yorkshire to play for them in the ongoing county season and in the limited time he had in the first half of the season before joining the Sri Lanka Test squad in Bangladesh for a two-Test series, he played three County Championship matches scoring 89 runs at an average of 22.25 and a top score of 36.

“More than the runs, the time I spent at the wicket was valuable for me,” said Karunaratne speaking to Daily FT from Chattogram in Bangladesh where he is preparing for the two Tests against Bangladesh starting on 15 March.

“I stayed a long time at the wicket, it was what I wanted although numbers wise, I could not score anything big. I took about 15 to 20 overs to score those 36 runs (twice) which means the conditions are tough. Runs don’t come easily as at home; you need patience to score runs in England. When you come and play in a country like England you build a lot of patience. Overall, I learnt a great deal although I could not convert them into big numbers.

“I think I batted well because when I inquired from the county coaches, they said that my opening partner and I performed the most difficult part for the team that is batting for the first 20-30 overs. We laid the foundation for the middle order batters to come, and score runs for after 30 overs or, so the movement of the ball is less and batting becomes easy.”

“It is still early summer, and the ball moves a lot, they hardly use spin, mostly pace. The openers are told to build the innings by batting for the first 20-30 overs, scoring was not important but to try and get the shine off the ball. After that the middle order will come and catch up on the run rate in the next 50 overs before the second new ball arrives. That’s how the game is played here. Unlike in Sri Lanka the first few overs are the most difficult because runs don’t come easily. In the match played at our home grounds in Leeds, although I was dismissed for four, I batted for 19 overs, and I faced a lot of deliveries. The ball doesn’t travel fast along the ground, even if you play a good stroke the maximum you get is two runs, you have to wait until the outfield dries out to find the boundaries.”

Karunaratne said that he benefitted a lot by sharing the dressing room with England cricketers like Joe Root, Dawid Malan, Dom Bess and Adam Lythe on how they handled their matches and how they plan in English conditions.

“When I spoke to Root, he told me of how he plays. The drive, we push at the ball, what they do is to let the ball come to you and play late guiding it to third man and fine leg. He said the first 30 overs are the most crucial because after that you can score runs easily,” said Karunaratne.

“I experienced that because the matches I played the first few overs we score about 50 or 60 runs for the loss of two or three wickets but from there onwards batsmen numbers four, five and six go on to make scores of 100 or 150 plus. What I learnt is you have to survive the first 30 overs not go looking for runs but take what comes and not worry about the run rate.”

Karunaratne spoke of the type of conditions he experienced at different venues. “At Leeds there is a lot of movement, I played at Essex and at Northampton and at each venue the conditions were different, they can change suddenly.”

“The weather can change most of the time, even on flat wickets when it becomes cloudy or gloomy the ball will suddenly start to swing. I stayed only for a short time, but I learnt a lot during that time. What was most helpful was their mindset for an international match and county match, and how they break the game down into parts.”

“When I bat in Sri Lanka, I normally take leg stump guard but the coaches at Yorkshire told me to take off stump guard then it is easy for you to leave the ball and, when they bowl to get you lbw because your strength is on the leg stump you can score enough runs. If you look at my overall Test performance, I’ve scored less runs in England.”

“Every time I go out to bat in England, I always have a doubt that I will not be able to score runs, but after the experience of playing with Yorkshire I am confident. I played against good bowlers and players like Alastair Cook (the former England captain).”

“I think by next year we may have a series in England, and I hope the experience I gained playing for Yorkshire can be made use of. I can share that experience with my teammates as well.” In 10 Test innings in England, Karunaratne has passed 50 only once and averages 28.44.