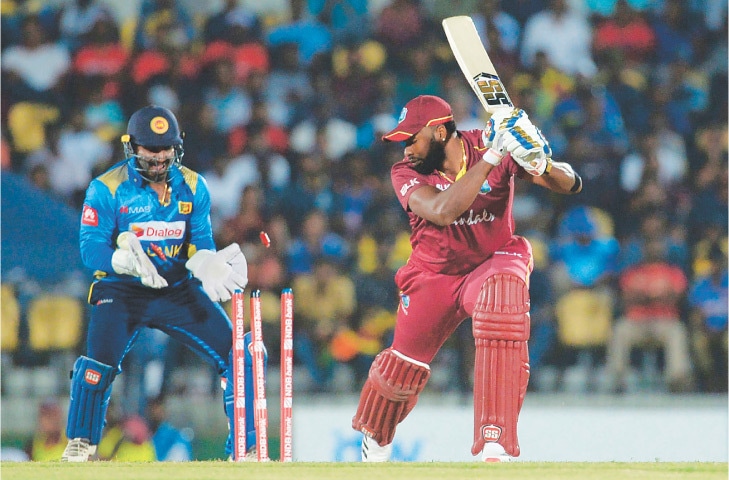 West Indies captain Kieron Pollard has labelled in-form leg-spinner Wanindu Hasaranga as a “trump card” and says his side are braced for the threat from the newly-crowned World number one bowler when they meet Sri Lanka this morning at 9 a.m.

Hasaranga has snatched eight wickets from four matches in the group stage and has taken 14 overall including the qualifying stage of the tournament. Yesterday he overtook South Africa’s Tabraiz Shamsi as the leading Twenty20 bowler in the International Cricket Council rankings.

Even though Sri Lanka lost their last two games to England and South Africa, Hasaranga picked up three-wicket hauls in those games – including a hat-trick against the Proteas – and the threat he carries has not been lost on West Indies.

Leg-spinner Wanindu Hasaranga celebrates against West Indies in the Caribbean earlier this year.

“Obviously he has been phenomenal for Sri Lanka for a long period of time, even in this World Cup just getting a hat trick the other day, as well. He has done well against us in the past,” Pollard pointed out yesterday.

“So he is definitely a trump card when it comes to their bowling line-up but as I said, different players and different persons have different ways of combating situations.

“But as a team we have chatted about how we want to go about batting certain individuals and what we need to do at certain periods of time, and again, hopefully it can come to fruition in this next game.

“It’s not only about Hasaranga. You have to be in that game (so) you have to think about the (Lahiru) Kumaras and the (Dushmantha) Chameeras and all these guys,” Pollard said.

“Everyone has a skill and a talent in their own right. We’re coming up against the Sri Lanka cricket team and we’re looking forward to playing a good solid game of cricket against that team.”

Hasaranga was also outstanding on Sri Lanka’s tour of the Caribbean earlier this year, picking up eight wickets at an economy rate of 3-½ and an average of five, as the tourists went down 2-1 in the three-match series in Antigua.

While West Indies have won six of their last seven T20 Internationals against Sri Lanka, the Caribbean side has captured only seven of 14 overall and Pollard said execution of roles would be critical.

“What are the keys is that every individual plays their roles,” the Trinidadian stressed. “We have been clear on roles and responsibilities and flexibility and I think it’s just a matter of guys doing that because if guys play their roles and play exactly what is needed – as one person mentioned before – we have a very, very good team on paper.

“But not being able to play a role and not taking responsibility and not being accountable to what the team requires at a point in time, from a batting perspective I just need to be clear – we have not done justice to our talents.

“Hopefully we can get it right and we have no other option now but to do it and have to do it pretty quickly as well.”