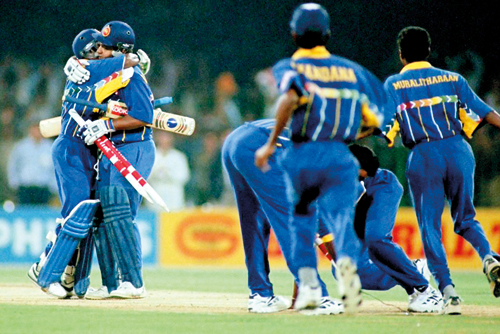 What are the contributory factors that helped Sri Lanka go from zero to hero? Firstly, half the Sri Lankans had played over 100 ODI’s each, and the Sri Lankan team that played in the final had a collective experience of over 1,000 ODIs. Indeed, Ranatunga had captained more ODIs than Mark Taylor had played in his entire career. Secondly, the average age of the Sri Lanka team was 27.5 years, hence, fielding, running between wickets, and catching played a key role. Sanath Jayasuriya 221 runs from 167 balls, with 30 fours and 8 sixes, bagged Player of the Tournament. Aravinda de Silva 448 runs, including 2 centuries and 2 fifties, at an average of 89.6, was adjudged Man of the Match in both the semifinal and the final. In fact, many observers felt, if Player of the Tournament was rightfully decided after the final, Aravinda would have bagged that award as well.

Finally, the leadership of Arjuna Ranatunga, who instilled a feeling of self-belief in his men, was the key factor.