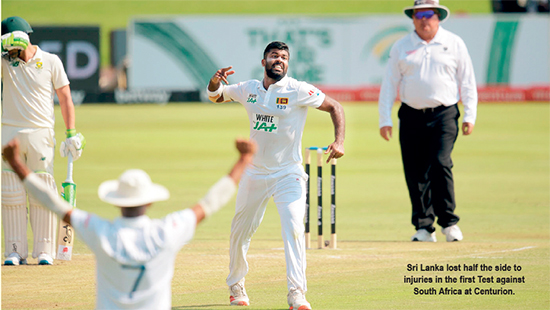 There are huge question marks over the modern day training methods. A fast bowler during training does not send down more than 30 deliveries as the team management fears burn out. Perhaps they need to take a look at how some of Sri Lanka’s most successful bowlers trained to be supremely fit.

Chaminda Vaas played international cricket for 15 years and into the bargain played County Cricket in England for ten years but he had just one major injury throughout his career. His training methods were insane and ten kilometer runs were a daily routine for him. Today it’s such a shame that you find fast bowlers with excess weight and no body wants to put them in their place.

Not often teams lose a Test match leave alone by an innings after posting 400 runs in the first innings. When you make 400 runs, you give yourself a good chance to win the game. Had all bowlers been firing on all cylinders, this Test match would have been a closer contest than what it turned out to be. There were positives, like posting their highest total ever in South Africa and all-round skills of Wanindu Hasaranga. But the team was losing a player almost every session and it was painful to watch.

Sri Lanka were asking for trouble when they played a T-20 tournament ahead of a Test series. The gap between the LPL final and the opening Test was ten days. Mickey Arthur has conceded that in hindsight they would have been better off pulling out the fast bowlers from the LPL. Is there a better example of closing the stable door after the horse has bolted!