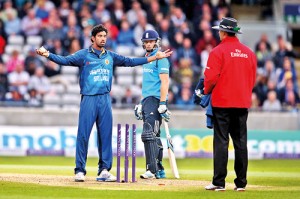 It seems Sri Lanka cricket is tumbling down without any let-up. Losing games from the junior levels upwards appears the norm. However, the only light recently is the victory in Men’s South Asian Games Cricket competition when the Sri Lanka Under 23 team beat Nepal – though a non-Test playing nation – played in Kathmandu. Now let us see what happens when the Sri Lankan Test team travels to Pakistan to play the all-important two Test matches. Realising the importance of these games, former skipper, Dinesh Chandimal has been, very interestingly – and thankfully, recalled to the team. More importantly, why was he sidelined in the first instance? A question that needs an answer Mr. Selector!

At the time of writing, former Pakistan head coach, Mickey Arthur, is set to take over on a 2-year contract as Sri Lanka head coach. Will Sri Lanka’s cricketing future help revamp the situation in the near future? Joining his backroom staff will be Grant Flower as batting coach, David Saker as bowling coach (both spin and pace?), and Shane McDermott as fielding coach, in what seems a complete overhaul of the team’s coaching set-up. Arthur is the 11th head coach of the Sri Lanka men’s team during the last eight years, and he will be returning to Pakistan – with the Lankan team where he had been head coach since 2016. However former head coach Chandika Hathurusinghe still appears to be in the saddle albeit in which capacity is another matter!