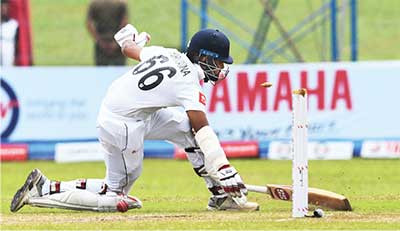 Scratching your head trying to come to terms with Sri Lanka’s bizarre collapse in the second Test against New Zealand on Monday? Here’s an interesting trivia. In selecting the final eleven for the Test match from the squad of 15, the selectors opted for only one player who averaged over 40 – Angelo Mathews. All other batsmen in the top seven averaged below 40. But among the players who had made it to the squad but weren’t able to find a place in t he playing eleven, there were two players who averaged above 40. The answer will not be told. Let the selectors do some research and figure it out. But here’s a strange one. Among the top seven batsmen was someone who averages 22 after 35 Test matches. How can someone with such a record keep away players with averages of over 40 is the big question.
The usual excuse is that Thirimanne is an opener. But aren’t we keeping better openers on the sidelines. Pathum Nissanka and Sadeera Samarawickrama have been knocking on the door for quite sometime now despite being given the cold shoulder. No Sri Lankan cricketer since the days of Jehan Mubarak have received an extended run like Thirimanne. When he fails as an opener, he goes to the middle order and vice versa.
7
SHARES
ShareTweet