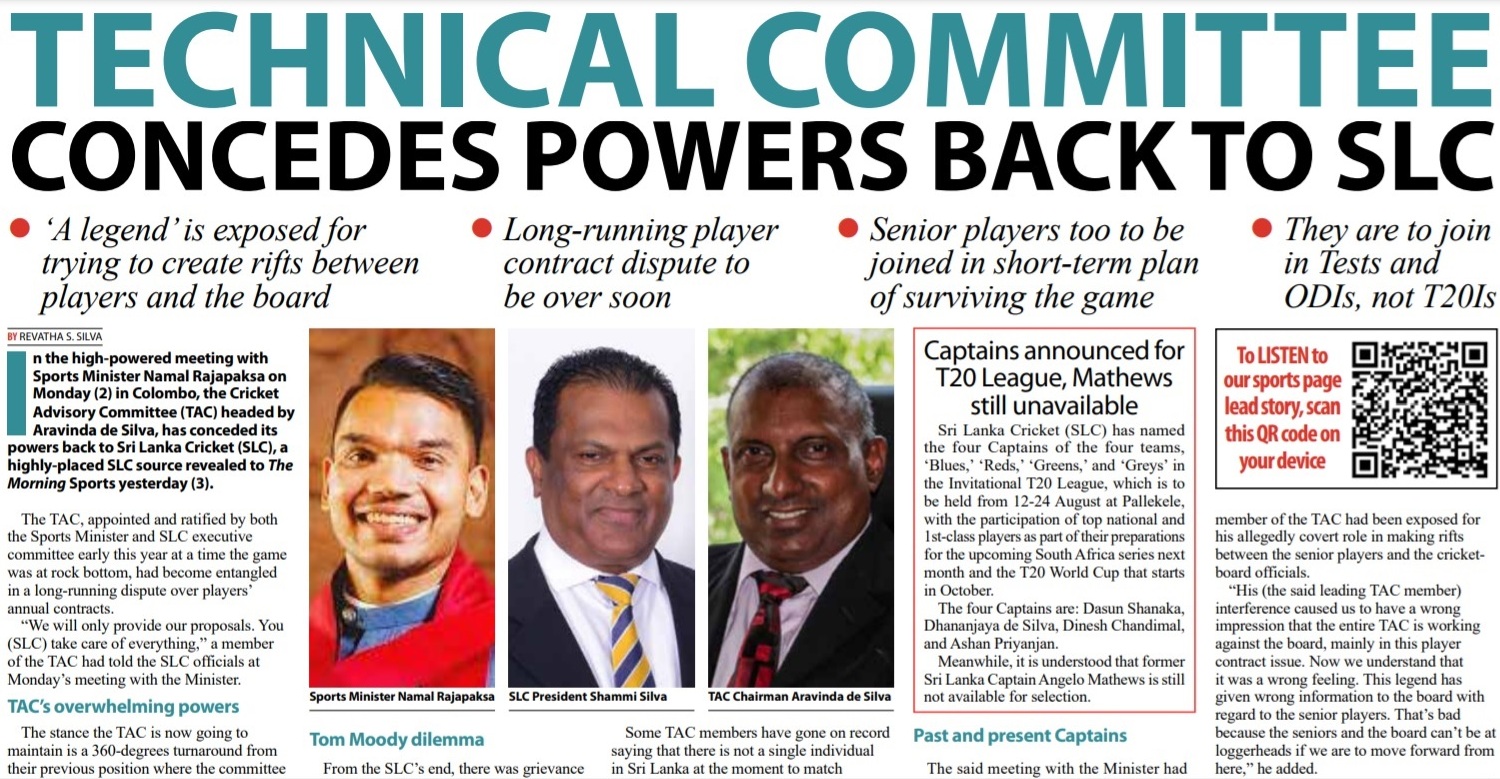 In the high-powered meeting with Sports Minister Namal Rajapaksa on Monday (2) in Colombo, the Cricket Advisory Committee (TAC) headed by Aravinda de Silva, has conceded its powers back to Sri Lanka Cricket (SLC), a highly-placed SLC source revealed to the Morning Sports yesterday (3).

The TAC, appointed and ratified by both the Sports Minister and SLC executive committee earlier this year at a time the game was at rock bottom, had entangled in a long-running dispute over the players’ annual contracts.

“We will only provide our proposals. You (SLC) take care of everything,” a member of the TAC had told the SLC officials at Monday’s meeting with the Minister.

The stance the TAC is now going to maintain is a 360-degree turnaround from their previous position where the committee –comprising Roshan Mahanama, Muttiah Muralitharan, Mahela Jayawardene, and Kumar Sangakkara along with de Silva– seemed to take care of almost all cricket-related matters at the national level.

The responsibilities of the TAC had reportedly ranged from drafting the player contracts to defining major policy frameworks of national cricket.

Later those TAC moves, particularly the drafting of the player contracts, became failures. The new contracts almost resulted in a player revolt and angered both players as well as the cricket-board officials. A few seniors retired from the game whilst some left the country seeking greener pastures. Nobody still understands on what basis those contracts had really been made.

From the SLC’s end, there was grievance that the elected body had been confined to do mere paper work as all significant policy decisions were being made by the TAC. One major decision by the TAC was to hire a Cricket Director in Tom Moody, a move which derived criticism from many quarters.

During the recent England tour, Moody had allegedly been paid $ 1,800 (approximately Rs. 358,000) per day, in addition to his stratospheric contractual payment of $ 180,00 (Rs. 35.8 m) per year for a three-year period, but the players have said there was no substantial contribution made by Moody in that series which Sri Lanka lost badly.

It was also revealed earlier that Moody had been hired by the TAC for the hefty salary mainly to identify talents and lay out a national structure, etc.

Some TAC members have gone on record saying that there is not a single individual in Sri Lanka at the moment to match the former Australian all-rounder’s coaching and managerial credentials. Moody is also Director of the Indian Premier League (IPL) team Sunrisers Hyderabad and Coach of Oval Invincibles in the ongoing The Hundred tournament in England.

“The responsibilities of the two bodies (SLC and TAC) are now pretty much clear. The Technical Committee is to only propose things. Execution of all those decisions is the work of the SLC,” the above source explained.

The previous understanding between the TAC and SLC was that the latter was to do the administrative side of the controlling of the sport whilst the former taking care of all that is directly connected to playing.

The said meeting with the Minister had run for around one and half hours with the participation of leading members of SLC executive committee, former SLC Presidents such as Thilanga Sumathipala, and past Captains such as Michael Tissera, Ranjan Madugalle, and Sanath Jayasuriya.

The current senior players, who had been in a wrangle with SLC over their annual contracts, had been represented at the meeting by Sri Lanka Test Captain Dimuth Karunaratne.

Before the meeting, the Minister had also met the TAC separately at the same venue for nearly two hours, with Jayawardene joining it via internet technology.

At the second meeting with the SLC officials and the TAC, one leading member of the TAC had been exposed for his allegedly covert role in making rifts between the senior players and the cricket-board officials.

“His (the said leading TAC member) interference caused us to have a wrong impression that the entire TAC is working against the board, mainly in this player contract issue. Now we understand that it was a wrong feeling. This legend has given wrong information to the board with regard to the senior players. That’s bad because the seniors and the board can’t be at loggerheads if we are to move forward from here,” he added.

“Now the contract dispute is likely to be sorted out without any more fuss because the board has a strong understanding with the seniors. The TAC is not going to intervene now and create unnecessary rifts,” he said.

“The selectors’ youth policy is getting us results. Our effort is to get the services of all senior players and form a balanced side across all three formats, going into the future for the 2023 World Cup,” he added.

“There, we need the services of Dimuth and the rest of the seniors, in the short-term, in both the Tests and 50-over cricket. That’s going to be our priority,” the source further revealed.