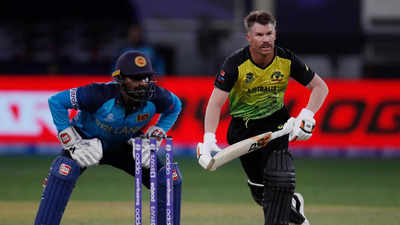 Newcomers Charith Asalanka (35 off 27) and Bhanuka Rajapaksa (35no off 26) along with old hand Kusal Perera (35 off 25) took Sri Lanka to a competitive total that had threatened to swell larger had it not been for decisive blows from Starc and Zampa.

The Australian pair engineered a match-turning collapse of 4-16 in 16 balls.

Warner, who said this week he found reports of his bad form laughable, was imperious in cracking 10 boundaries, most with cross-batted strokes through the on-side, and treated the Sri Lankan bowlers with contempt.

Inexplicably dropped on 18 by keeper Perera, Warner nearly flattened speedster Lahiru Kumara with a blistering drive that had both bowler and umpire ducking for over.

Finch also unfurled a series of crisp strokes down the ground, including a charging drive off a 148kph offering from Kumara, in his fastest T20I innings in nearly two years.

Zampa was equally impressive; his wrong’uns proved indecipherable, including to Asalanka who had threatened to take the game away from the Aussies, as the leg-spinner remarkably conceded only singles in a spellbinding effort.

Starc delivered one of the balls tournament so far, a searing yorker that clean bowled Perera to put Sri Lanka on the ropes before Rajapaksa rescued them with a smart finishing knock.