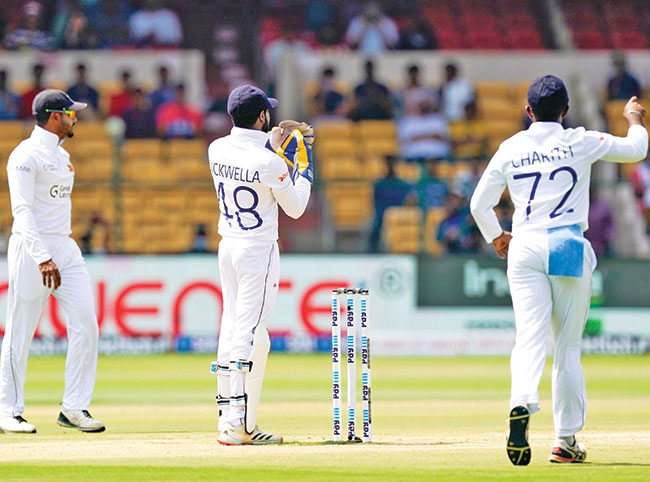 For some strange reason, Sri Lankan teams have failed to compete in Test matches in India. Despite Sri Lankan teams travelling there for 40 years, the closest they came to win a Test match was on their first trip, way back in 1982. Even teams comprising some of the greats of Sri Lankan cricket have failed miserably in Indian conditions over the years. Strange for a nation that is the only Asian team to have won a Test series in South Africa, where most teams struggle.

One of Sri Lanka’s decent tours of India was the one in 2017. Having been whitewashed 3-0 at home by the same opposition, not many had given a chance when Sri Lanka landed in Calcutta for the return series in November 2017. The tourists lost the Nagpur Test but came out with their heads held high at Eden Gardens and Feroz Shah Kotla having drawn both games. The Delhi Test in particular was a thriller as Sri Lanka played out of their skins to earn a draw.

One of the standout performers on that tour was Niroshan Dickwella. He kept wickets so well, batted responsibly and often got under the skin of the opposition. The Sri Lankan wicketkeeper was particularly a thorn in the flesh when Indian captain Virat Kohli came out to bat.

Kohli never one to take a backward step, picked up a few fights with Dickwella, but at the end of the series was the first man to applaud the young Sri Lankan, who was 24 at that time. Kohli even predicted a bright future for the man who was once earmarked as a future Sri Lankan captain. Alas! Since then, very little has gone right for Dickwella.

Dickwella continues to disappoint. He would walk in with the team in trouble, the opposition would place two players square on the leg-side for his pet sweep shot and you can be assured that Dickwella will find one of those two fielders. Want proof, well that was exactly what happened in the first innings in Mohali this month.

India had posted a mammoth 574 for eight declared, Sri Lanka had slumped to 161 for five and in walks Dickwella. He sweeps straight away, misses a couple, tries it again, gets a top edge and finds Shreyas Iyer.

Mind you this is a man who is making a comeback after a suspension. Usually, when players have been dealt bitter blows in their careers, they are determined to prove their detractors wrong. But here’s Dickwella, walking in like Adam Gilchrist and playing the fatal cross-batted shot straightaway. The message he is passing onto the selectors is clear, ‘drop me if you can’.

It was a crucial stage of the game with Pathum Nissanka involved in a lone battle and he needed some company. Dickwella proved to be bad company.

The national cricket team is no joke and we can certainly do without comedians like Dickwella. At least, until, he learns his lessons.

Dickwella’s antics continued in Bangalore in the next Test.

Sri Lanka made a breakthrough in the second over when Mayank Agarwal was run out. None had a doubt. Not the umpires, not the batsman or the Indian captain Rohit Sharma, who was the non-striker. But we have a doubting Thomas in Dickwella. He wanted a review for leg before wicket!

It is our earnest hope that someone in the dressing room questioned Dickwella’s actions. The best explanation that can be given is that he had a brain fade. Giving Dickwella license to review is like giving license to Ajith Nivad Cabraal to fix the economy.

Ending the suspension of Dickwella and brothers early was a no brainier. Some players Sri Lanka Cricket has treated with kids’ gloves and they continue to disappoint. Their callous disregard for the game doesn’t augur well moving forward.

A closer look at Dickwella after the suspension tells you many stories. One of them is that he has not learned his lessons. He remains incorrigible.

Take a look at Rishab Pant. He was just an ordinary keeper but his keeping has improved leaps and bounds while his batting has reached new heights. He can now walk into the Indian side as a specialist batsman. Anyway, he’s batting at number five.