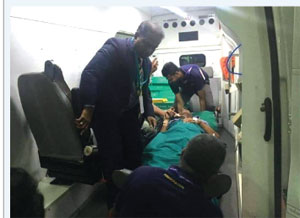 Sri Lanka’s opening batsman Avishka Fernando’s father was rushed to hospital after he fainted during his son’s scintillating knock in the second ODI against Bangladesh at RPS last night. Chasing a target of 239, Sri Lanka won by seven wickets as Avishka slammed 82 off 75 balls. He was named Man of the Match. The senior Fernando is out of danger.