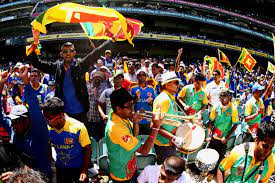 A popular papare band from the Sri Lankan city of Colombo is set to get the crowds on their feet at the T20 World Cup semi-finals and final in Abu Dhabi and Dubai.

Cricket lovers from Sri Lanka, Pakistan and India paid for plane tickets, meals and accommodation to ensure the four-member band arrived in time for the first semi-final between England and New Zealand in Abu Dhabi on Wednesday.

The musicians, who play the trumpet, trombone and drums, promise to add to the atmosphere at matches and get spectators dancing in the stadiums.

“It’s a tradition for the papare bands to play at cricket matches and weddings, and we wanted to bring music that is unique to Sri Lanka to the UAE,” said George Hettiaratchy, a Dubai resident who helped with the arrangements.

“The band will create a lively mood for both teams. We will cheer for cricket and we support a good game. It does not matter that the Sri Lanka team did not make it.”

Hundreds of Sri Lankan and Indian fans will watch the games even though their teams have already been eliminated from the tournament.

It took a joint effort from people of different nationalities to ensure the Mendis Papare Band arrived in the Emirates.

Sri Lankan restaurant Thambapanni will provide the band members with meals, while Pakistani residents covered the cost of flights, visas and accommodation at a two-bedroom apartment in Sharjah.

The Abu Dhabi Cricket Council arranged complimentary tickets for Wednesday’s game and an Indian cricket fan paid for the tickets to the final on Sunday.

“Kind-hearted cricket lovers have covered expenses because the band needed sponsorship. We are not rich and could not afford hotels,” Mr Hettiaratchy said.

“All nationalities came together and helped when we started applying for visas and tickets.”

The group is still short of Dh4,840 ($1,318) to cover the band’s fees for the games and the cost of tickets for Thursday’s semi-final between Australia and the undefeated Pakistan team.

Papare music is central to Sri Lankan cricket. Fans say they have grown up with the music and drums and cymbals can often be heard during matches at all levels in the country.

Hundreds of cricket lovers were disappointed when they were not permitted to take musical instruments to Sri Lanka’s first game in Sharjah last month.

The ICC later lifted the restrictions at all venues, saying they “understand the need to build up the atmosphere”.

It has been an uplifting journey for the musicians who follow the Sri Lankan team around the world.

Sanath Mendis, the band’s founder, usually has 20 musicians in demand for sporting events and weddings.

But the Covid-19 pandemic and restrictions on gatherings have cut their earnings and the group has been out of work for months.

“We have been struggling, there has been nothing, no work for us for a long time,” said Mr Mendis, who plays the trumpet.

“We will take good memories from here and we are hoping things will improve. We are thrilled at the chance to come to Dubai.

“We are happy for this opportunity, it’s really amazing and we will do our maximum to see that everyone enjoys the match.”

Mr Hettiaratchy said organising the band’s trip was one of his final acts in the UAE before he retires early next year.

“I will be leaving Dubai in February after working here for 37 years and wanted to give something back that people would remember,” he said.

“We thought with the UAE celebrating its 50th national day we should bring the band during the World Cup to bring all nationalities together.”