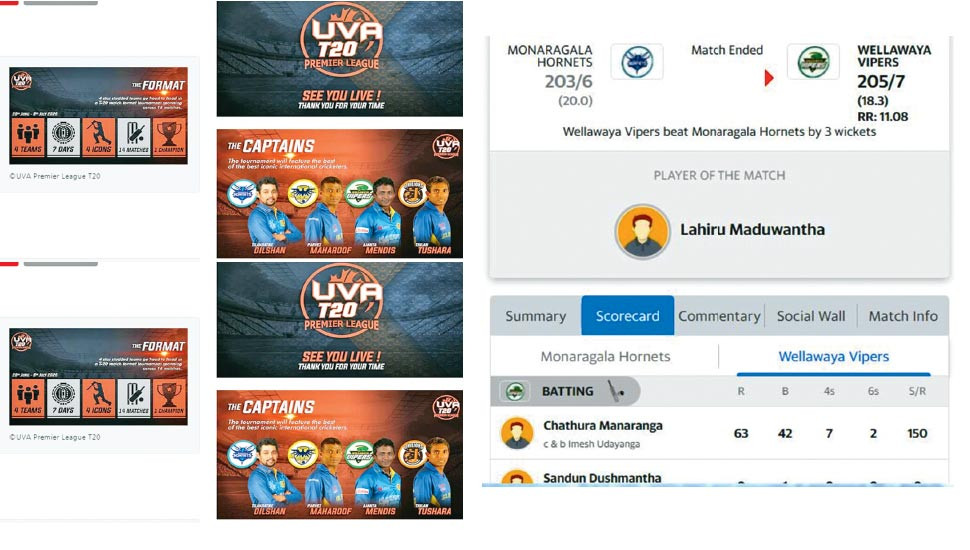 Sri Lanka Cricket (SLC) has lodged a complaint with the Police Special Investigation Unit for Prevention of Offences Relating to Sports Act regarding a tournament titled ‘Uva Premier League 2020’.

According to several Indian based websites the said tournament was launched two days ago and was to be played from 29 June to 5 July. Four teams in the Badulla District were said to participate in the tournament.

Upon inquiry Ceylon Today found there was no such tournament being played, while these images, information and even live scorecards were a hoax and used without the players’ knowledge or consent.

“If there’s such tournament that’s an unsanctioned one, and highly likely to be organized by corrupters. I won’t be part of such a tournament ever,” Farveez Maharoof told Ceylon Today.

Meanwhile, Thilakarathne Dilshan is in Australia at the moment, while Sachithra Serasinghe too stated that he had no idea about such a league, or how his name had been used for such a tournament until now, and said he is going to complain to SLC regarding this.

Several YouTube channels too broadcast a live-like commentary with scorecard and crowd noises in the background, where one could think there was really a match going on, though it has now come to light it was a hoax.

A few days back there was a similar plan to play a league called Puttalam District T10 League (PDCT10) where several Indian based websites had a full schedule of matches and even player lists, which had a number of ex Sri Lankan National players.

SLC announced they had not sanctioned such a tournament, and none of the contracted players said they were taking part in the said league, and the tournament was never played.