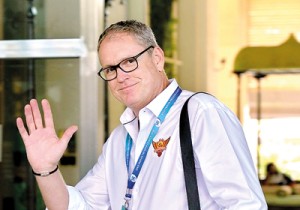 Tom Moody has agreed to make himself available for 100 days during his three-year contract period as a consultant to restructure every facet of the game in Sri Lanka.

Moody, who is no stranger to Sri Lanka having coached the national team between 2005-2007, is expected to review and analyse the current cricket structure to design a clear and effective development plan to ensure excellence across all levels of the game. During his previous stint as head coach Moody, Sri Lanka reached the World Cup final.