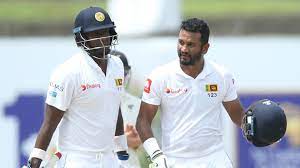 Sri Lanka cricketers were on show today on the opening day of the Major Limited-Over tournament with Test Captain Dimuth Karunaratne, ex-skipper Angelo Mathews and Suranga Lakmal turning out for their respective clubs.

These cricketers, who have been sidelined from white-ball cricket by the national selectors and the Cricket Advisory Committee, last appeared in competitive cricket in the Test against Bangladesh in April this year, after which the controversial performance-based player contract dispute arose.

Karunaratne, opening the batting for SSC against Police SC at the NCC grounds, managed 17 off 30 balls before being dismissed, while Mathews fared a little better, scoring 45 off 60 balls (two fours, one six) for Colts against Galle CC at the Colts grounds. Lakmal, leading Tamil Union, took one wicket for 24, bowling six overs in their match against Sebastianites at the P. Sara Oval.