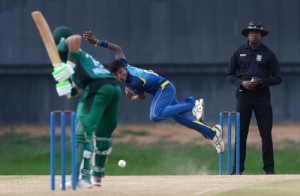 Ever since the Under-19 World Cup this year, the cricket fraternity in Sri Lanka has observed with interest the progress of a promising left-arm fast bowler, who emerged from the rural village of Hungama in the Hambantota district. Despite having numerous obstacles to overcome in life, Dilshan Madushanka pursued his dream, determined to represent Sri Lanka.

Among the many difficulties early in his career was having to convince his parents, who were reluctant to allow him to play cricket believing that it would be a distraction from his studies. Despite the challenges he had to come across, his passion for the sport didn’t diminish.