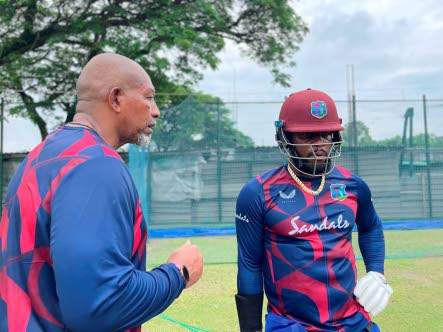 While the upcoming series presents a chance for West Indies to redeem themselves, Simmons said the Kraigg Brathwaite-led side would have to display their “fighting spirit” in order to come away with a positive result.

After a huge disappointment like that, we want to get back to winning ways and especially winning away, which we did at the start of the year,” said Simmons, who has come under fire in wake of the T20 World Cup disappointment.

“It would be nice to finish the year the way we started it.”

He continued, “Facing them at home has always been a difficult task and it’s no different now. It’s a younger team.
I think it’s going to be close to the team we had in the Caribbean.”

We know that “When you come to the subcontinent and play against these teams at home, it’s always going to be tough.

“We have to make sure that in this four-day game we get our fighting spirit, especially when it comes to batting, because that’s going to be the most difficult aspect of this tour.”

West Indies will be hunting their first-ever Test match win on Sri Lankan soil after losing seven of their last 11 matches and drawing four.

On their last tour here in 2015, West Indies were tormented by left-arm spinner Rangana Herath, who finished with 15 wickets, and Simmons said recent precedent suggested his side needed to be prepared for a diet of spin from the hosts.

“It will be a heavy dose of spin coming from them because we noticed that, even when they played in England, they opened the bowling with a spinner,” Simmons pointed out.

“So we’re going to be focusing a lot on how we combat that spin with the new ball and then bat as normal after that, because we’ve played spin alright in Bangladesh [earlier this year].

“We did what we had to do to score the runs we needed and to win the games, so we need to bring that same sort of mentality we had on that away tour.”

Simmons said one of the key areas identified in combating Sri Lanka’s spin attack would be strike rotation.

“That will definitely be an area of focus, especially when you’re playing against quality spinners,” said the former all-rounder, who was part of the first West Indies Test tour to Sri Lanka in 1993.

“You have to continually change their [spinners] mode, especially when you have the left-hand right-hand [combination] at the crease, so it is something we’re going to be discussing and putting into practice.”

West Indies will play a four-day warm-up match starting on Sunday before turning their attention to the first Test in Galle on November 21.