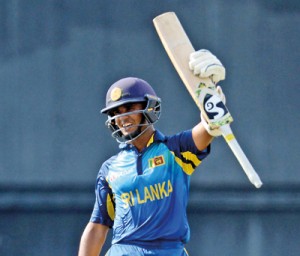 As the national cricket team seeks long term solutions to end the crisis that has been haunting Sri Lanka cricket ever since the departure of Mahela Jayawardane, Kumar Sangakkara and Tillakaratne Dilshan, here is a story of a promising youngster who is determined to make his father’s dream a reality.

Sri Lanka had a dismal Under 19 World Cup in South Africa in which they returned home empty-handed finishing an embarrassing 10th position.

Despite the debacle they had to encounter in the rainbow nation, Ravindu Rasantha burst into the lime light being the second highest run-getter in the tournament. Rasantha provided the silver lining for Sri Lanka who failed to progress to the knockout stage. The elegant Thomian right hander impressed in the matches against India and Nigeria, with scores of 49 and 102 not out respectively while he also scored a fighting 66 which came in a losing cause in the Plate final against England. He scored 286 runs in the tournament at an average of 71.50 and was also included in the ICC team of the tournament.