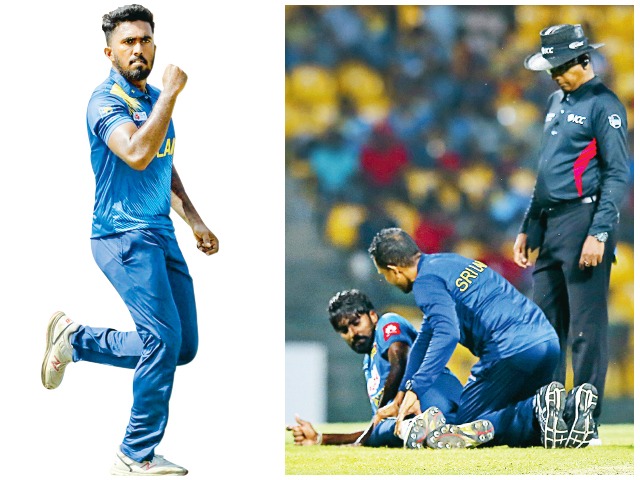 Paceman Nuwan Pradeep who suffered an injury during the third ODI against West Indies, will be out for six weeks and will be replaced by 21-year-old paceman Asitha Fernando.

Pradeep who bowled 4.3 overs in the third ODI walked back to the pavilion during the 37th over with a knee problem. Pradeep has been injury prone in the past and the team management had asked him to focus on the limited over game instead of Test cricket. Pradeep has been Sri Lanka’s premier strike bowler in ODIs and have depended on him in the death overs.

Asitha Fernando who played in the same Under-19 team as Lahiru Kumara, will replace Pradeep. Fernando unfortunately missed out on selection even though in the last few months he has been performing well consistently in domestic matches, ‘A’ team games and tour matches. He had figures of 2 for 17 and 1 for 39 in the two practice games against West Indies and is currently the leading pace bowler in the domestic Premier league taking 26 wickets in three games, inclusive of figures of 7 for 139 in one inning.

Dhananjaya de Silva has a medical condition in his hand which requires surgery and will be out of the T20 series. A replacement will not be made as Spin bowling all-rounder Shehan Jayasooriya is already in the squad.

The two match T20 series against West Indies will be played on 4th and 6th at Pallekele.