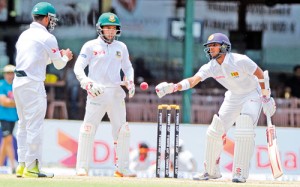 Batsman Kusal Mendis has been forced to wait longer to earn a recall to the national Test side after the new national selectors decided to give him an extended break from international cricket. The 26-year-old right-hander who missed the West Indies series has been dropped for the two-match home series against Bangladesh starting on Wednesday in Pallekele.

Highly rated Mendis has been through a lean patch since Sri Lanka returned to action following the COVID-19 enforced long break, scoring just 27 runs off six innings including four ducks in a row. The selectors want the former Prince of Wales skipper to prove himself in white-ball cricket before being considered for the longer format.

“He is an important player we have but we do not want to bring him straight into the Test side after his recent horrid run with the bat,” explained chief selector Pramodya Wickremasinghe.

“What we thought was to phase out his return to the side.”

Mendis’s return to the side has also been affected by the performance of Pathum Nissanka who has had a series to remember in the West Indies. The diminutive batsman enjoyed his maiden outing in the middle joining an elite group of players who scored a ton on debut and then a half century in the next game helping Sri Lanka achieve a rare Test series draw in the Caribbean.

“Even then, it won’t be easy for him to find a place in the side. Pathum (Nissanka) has had a terrific series and even Oshada Fernando played well. So it’s good to see these guys are putting pressure on the seniors now,” he added.

Mendis, who made his Test debut in 2015 has played some of the greatest knocks the world has seen. His match winning 176 against Australia at Pallekele was a career defining moment that earned much admiration from the cricketing fraternity for his iron resolve shown at a very young age.

But lack of consistency has been his biggest issue in recent years. In 2019, he played 16 Test innings but managed only two half centuries. He had a good start to the 2020 season hitting a century and half century against Zimbabwe but with the pandemic stalling all sporting activities, his performance too had taken a toll…