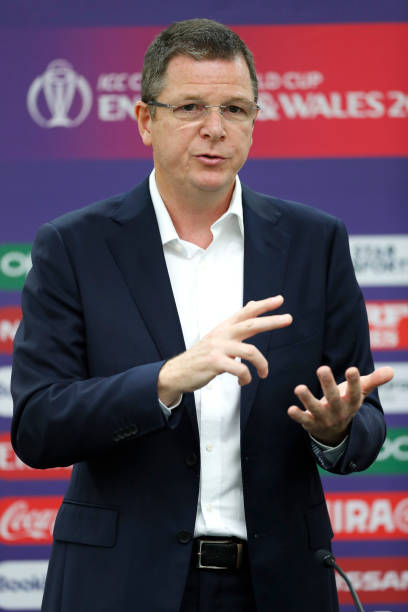 Sri Lanka has been in hot water over the International Cricket Council (ICC) AntiCorruption Unit investigation during the recent past, where five Sri Lankans including four former players were charged, with only Avishka Gunawardana being cleared. Former Scotland Yard Chief Constable Alex Marshall, 59, who was appointed as the General Manager of the ICC Integrity Unit in September 2017, has been busy since then.

He said they have charged 22 participants, including five Sri Lankans, where apart from Gunawardana, Sanath Jayasuriya, Dilhara Lokuhettige, Nuwan Soyza (all three former Sri Lankan players), were banned by the ICC, with Jayasuriya completing his ban. Sanath Jayasundara, the TV analyst of SLC, too, was banned. Sri Lanka was tainted as the most corrupt cricketing Nation in 2019-2020 in several media reports.

I never ever said that. But that has tumbled. Sri Lanka is not the leading number of investigations by a long way. We have seen a significant difference as we have got through all those cases. Players have got better and better in reporting any sort of suspicions,” said Marshal. Marshal said that in Sri Lanka players are better at spotting and reporting corrupters’ approach, but it’s the people around them which had created problems. “In Sri Lanka players are very good at spotting and understanding how the corruptors are likely to get at you.

Actually, in Sri Lanka, it has been the people around the players who have the opportunity to get to them, and whom the corruptors generally have gone for,” said Marshall. “The playing group is a good group. If someone tells them to play badly, they tell us. They have been coming along to Tribunal and giving evidence. This is what they are supposed to do.

But I am sure you will come across the world of cricket, people are quite scared of doing it. They don’t like doing it. But in Sri Lanka players have started doing it. ‘He said if you do this, I will give you some money’; very strong, very powerful evidence. So massive improvement in Sri Lanka,” added Marshall. Marshall hails steps taken by Sri Lanka to fight corruption in sports. Sri Lanka introduced anti-corruption legislation where, if found guilty, corruptors could now go to jail.

“They brought in legislation to make match fixing a crime. Top effort. First place in the sub-continent to bring in that legislation. I think that message has gone across to most people. Anyone who is trying to ignore that legislation can go to prison. In Sri Lanka we have seen a shift. It is regarded as a serious thing with the Police getting involved and the Government getting involved.

The Government has taken it seriously,” said Marshall. Coming back to how corruptors work with players in modern day, Marshall explained how present-day corruptors might approach players for a fix, especially during franchise-based tournaments. “So, the corruptor let’s say (Name is redundant) is an ex-player and knows all the players.

It is hard for them to get to the players if they phone us at the first sniff, or they sense something dodgy. But if they go through an ex-player whom they are used to get on with and trust, they will get into conversation with them. Last year’s LPL is a good example,” said Marshall. There were several media reports last year during the LPL about an ex-National player’s attempt to approach a player for fixing, which Ceylon Today learned was reported to the tournament’s anticorruption unit. LPL which is run by Dubai based Innovative Public Group (IPG) will hold its 2nd edition this year, where player draft is scheduled on 9 November.

Marshall said that when a tournament goes wrong it’s very often through franchise owners. “What we do know is where a franchise tournament goes wrong, it is very often through the franchise owners. So, if we get the wrong people in charge of the team, you will get corrupt approaches. You can say that by looking at franchise tournaments around the world. If you remember the Afghanistan premier league in 2017, that went badly wrong. There was an events company there that came under our suspicion. That’s been well published.

My report was leaked in Afghanistan, so it’s all over the media. Basically, the company running it was involved in corruption. So, we always look at the companies that run these events and we say to host boards to be really careful about working with these people if they have a bad record,” said Marshall.