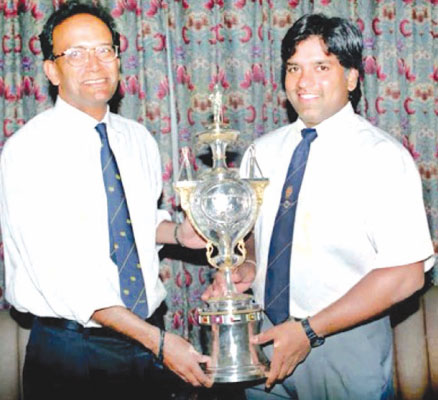 With sport around the world and in the country coming to a virtual standstill because of the corona virus epidemic it will be pertinent to recall that today (March 17) marks the 24th anniversary of Sri Lanka winning the Cricket World Cup in Lahore.

When it will happen again is a matter of conjecture. We have come twice come close to laying our hands on the World Cup and lost the finals in 2007 and in 2011.

Ana Punchihewa who was president of the Board of Control for Cricket in Sri Lanka (BCCSL as it was then known) reliving the moment in Lahore said, “On the day we won the Cup, Arjuna (Ranatunga) receiving the World Cup from Pakistan Prime Minister Benazir Bhutto and Arjuna hitting the winning runs, those are the two most memorable moments that I remember that day and most of the people in Sri Lanka also remember.”

“It took a little bit of time to realize that it was really happening and the significance of that moment, then tears came to my eyes that ‘we did it, the boys did it’ that I had played a part in it, a little bit whatever to make it happen, the whole country was very proud of the moment to this day.”