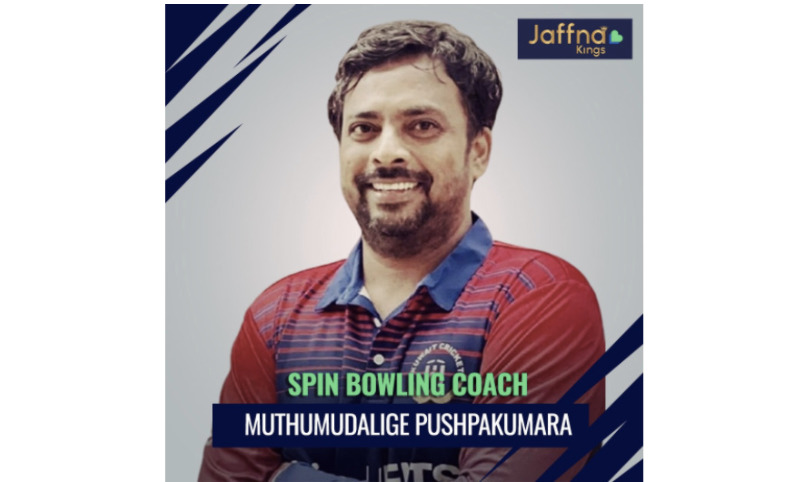 Muthumudalige Pushpakumara, the National Head Coach, Head of Development for Kuwait Cricket and who represented the National Cricket Team of Sri Lanka is announced the Spin Bowling Coach for Jaffna Kings for the second edition of Lanka Premier League (LPL). He was awarded the post after Sachith Pathirana, the previous Spin Ball Coach, was made the Coach for under-19 Cricket Team of Sri Lanka.

Muthumudalige Pushpakumara is currently serving as the National Head Coach and Head of Development for Kuwait Cricket since 2019. The National Cricket Team of Kuwait also has gained a remarkable progress under his guidance.

Similarly, Pushpakumara who has served as the Head Coach for the Colts Cricket Club has 09 years of experience as a coacher is obviously a tremendous strength and energy for Jaffna Kings.

With Pushpakumara’s leadership, the spin bowling squad along with Wanindu Hasaranga, who is placed first at ICC 20/20 bowler rankings, Jaffna Kings shows greater possibility to cruise towards victory over their rivalry at the LPL season two.

Muthumudalige Pushpakumara studied at the Ananda College, Colombo. Having shown his all-rounding talents, Pushpakumara got selected as the best schoolboy cricketer. Moreover, Muthumudalige he received accolades as the Most Outstanding Sportsman at the under-17 Singer Trophy Tournament and Prince of Wales Trophy held in 1998.