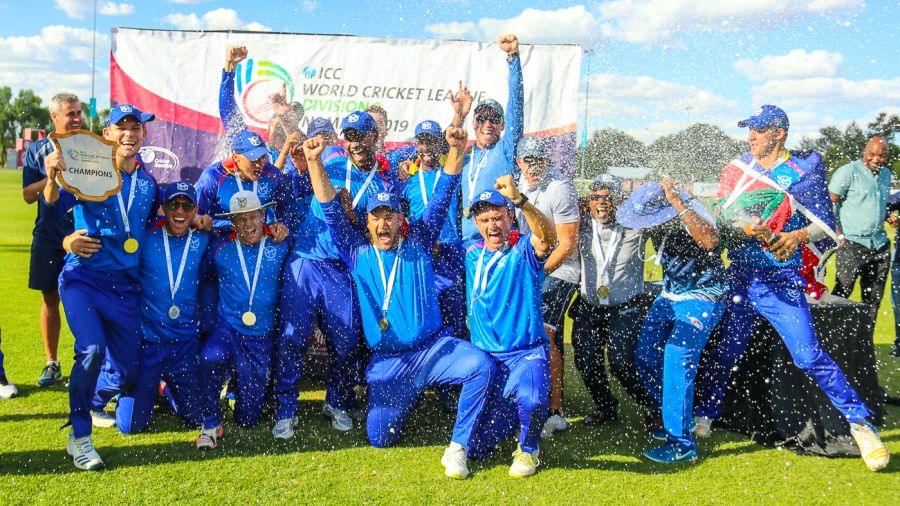 Netherlands, Namibia, Scotland, Oman and Papua New Guinea have battled their way through the qualifiers to the tournament proper. What lies ahead of them?

Gerhard Erasmus: The captain is the spine of the batting order, capable of anchoring the innings or revving up the engine when necessary. In a big win over Singapore in the World Cup Qualifier, he struck four sixes in a 29-run over. He also later showed his class with a half-century against Ireland. Erasmus bowls more than handy offspin and is also Namibia’s best fielder.

JJ Smit: The 25-year-old allrounder’s value as batter and bowler is at the death. He does not bowl at express pace but is accurate with his yorkers. He has also turned many middling totals into challenging ones with his belligerent striking, such as in his 59 off 25 balls with five sixes in a win over Oman that clinched their spot at the World Cup.

Bernard Scholtz: Namibia’s all-time leading wicket-taker in first-class and T20 cricket, Scholtz is not a big turner of the ball but relentlessly probes away with accuracy to build pressure that results in breakthroughs both for him and anyone bowling in tandem. He was the Player of the Tournament in the 2015 T20 World Cup Qualifier, and had the most wickets among spinners at the 2019 Qualifier.

Namibia have drawn the short straw, getting paired with former world champions Sri Lanka, along with Ireland and Netherlands, both of whom they lost to in the T20 World Cup Qualifier by wide margins. It will be an uphill battle to advance to the Super 12s.

Ryan ten Doeschate: He was the second-highest run scorer for Netherlands in the Qualifier. A year later, he topped the run charts for Essex at the 2020 Vitality Blast. Although his recent form hasn’t been great, and he no longer bowls in T20, the 41-year-old will be determined to make an impact in what will be his last tournament.

Roelof van der Merwe: Another globe-trotting veteran, van der Merwe can change the complexion of a match with both his lower-order hitting and left-arm spin. In this year’s Vitality Blast, he picked up 11 wickets in seven games at an economy of 7.19 in Somerset’s run to the final. This will be his fourth T20 World Cup; the first two came for South Africa.

Paul van Meekeren: A tall fast bowler who can touch 140kph, van Meekeren also possesses a handy slower ball. Earlier this year, in his debut CPL season, he picked up eight wickets in as many games at an economy of 7.93 for St Kitts and Nevis Patriots, the eventual champions.

Netherlands are paired with Sri Lanka, Ireland and Namibia in Group A, from where the top two teams will qualify for the Super 12s. If they can beat Ireland in their opening game, they should make it to the next round, given they are favourites against Namibia. Anything beyond that will be a miracle.