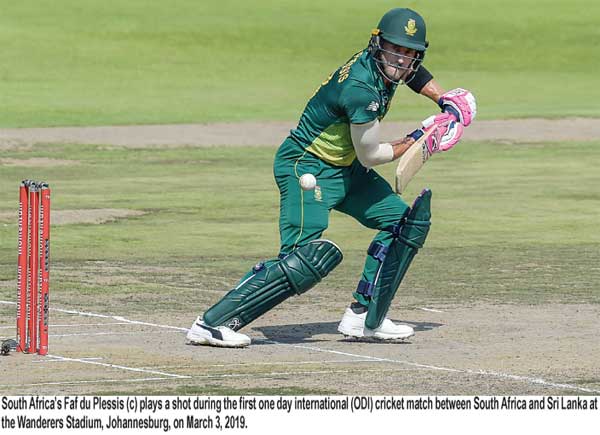 You expected seamers to trouble Sri Lanka but unexpectedly it was the leg-spin of Imran Tahir proved to be their undoing as they suffered an eight wicket defeat in the opening ODI of the five match series here in Johannesburg yesterday.

Sri Lanka have had trouble with Tahir earlier to and yesterday the Pakistani born spinner, who will turn 40 this month, were all over the tourist.

After the openers had departed cheaply, Kusal Janith Perera and Oshada Fernando had added 76 runs for the third wicket before Tahir found the breakthrough in his first over.

Perera, hero of the Durban Test, didn’t pick Tahir’s googly and was caught behind.

Kusal Mendis was given out leg before wicket in Tahir’s next over but the batsman successfully reviewed the decision. Desperate to get off the strike to the leg-spinner, Mendis attempted a single to short mid-wicket the next ball. South Africa had positioned one of their best fielders in David Miller there. Fernando was not interested in the run and started off late while Miller, still airborne, threw the ball to the striker’s end to find Fernando just short.

The debutant missed a well deserved half-century by a single run. He looked solid though not afraid to play his shots. His run a ball 49 included five fours and two sixes. The sixes were off Kagiso Rabada and Lungi Ngidi, both straight hits over the ropes with exquisite timing.

Mendis and Dhananjaya de Silva then added 94 runs for the fifth wicket and it looked as if Sri Lanka were set to post 300 plus. Tahir returned for his second spell with three overs left and again changed the equation of the game accounting for both batsmen.