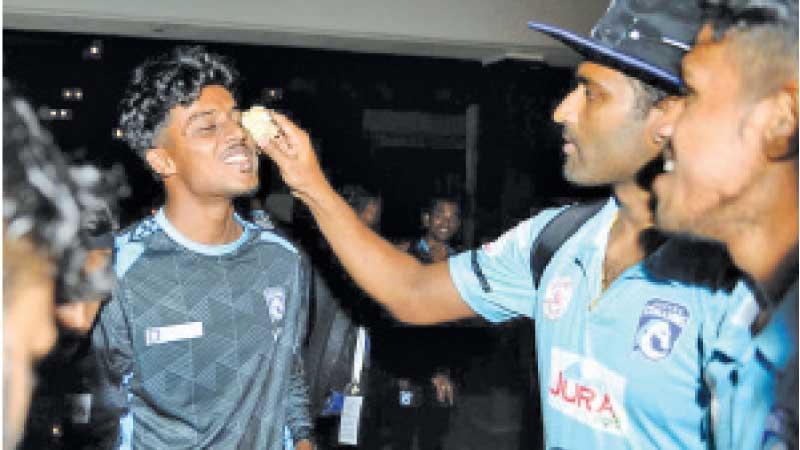 Vijayakanth Viyaskanth, the Jaffna Stallions leg-spinner, defying his mother’s words against cricket went on to overshadow some efforts by the winning team, Colombo Kings (CK) as he made news at the other end of the country on his dream-debut on Friday at the LPL in Hambantota.

He became the cynosure of all eyes after he turned out to be the very first player from the war-scarred North to play at a higher level.

Coming in to bat as the last man, he had to face the threat from the tournament’s rock star of T20, West Indian Andre Russell. But the ex-Sri Lanka Under-19 cap Viyaskanth survived the death-overs with calm and composure.

When his turn came to bowl he sent down deliveries sans much jitters on the new strip.

But the best was yet to come for Jaffna’s young blood who in his third over hooked the big fish in the form of former Sri Lanka and CK’s captain, Angelo Mathews thanks to a Shoaib Malik athletic catch plucking the ball hit high to clear the boundary.

Watching the action transpire all the way at home was Viyaskanth’s mother, Vallinayaki and family members who had to overcome the anxious moments of power fluctuation while watching the match on television due to the cyclonic weather on the day.

They missed him at the crease but were fortunate to see him bowl and capture the wicket of the former Sri Lanka captain at the residence of Vallinayaki’s mother.

“We braved the weather and moved there wasting no time. You would know how euphoric and ecstatic we were. There were as many as five families following the match,” Vallinayaki told the Sunday Observer…