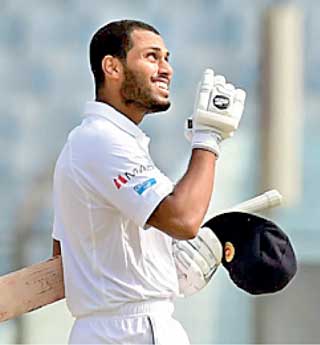 Roshen Silva played the last of his 12 Tests two years ago against Australia in Brisbane where he twice fell victim to fast bowler Pat Cummins without reaching double figures. Since then he has received the

Yesterday he made a statement with an inspiring innings of 174*, his 25th century in first-class cricket although it could not prevent Jaffna from taking first innings points from the drawn game in the National Super League four-day tournament.

Colombo replying to Jaffna’s tall total of 555, were in deep trouble at 59-5 when Silva with the help of the late order carried the total to some form of respectability – 360 in half century partnerships with Krishan Sanjula (35) and Nisala Tharaka (38). Silva’s composed knock which came off 259 balls comprised 19 fours.

Jaffna batted out the rest of the day gaining some valuable batting practice for their next match against Kandy starting on Thursday scoring 217-5 with skipper Sadeera Samarawickrama returning to form with a stroke-filled 96 off 118 balls (11 fours).

Galle gave Kandy a mighty scare when they came within 18 runs of gaining first innings points in their drawn game at the Galle International Cricket Stadium. Replying to Kandy’s first innings of 482, Galle resuming at their overnight total of 388-8 fought tooth and nail to get pretty close to Kandy being eventually all out for 465.

The fightback was led by the Army SC all-rounder Suminda Lakshan who went onto score his fifth first-class century and figure in two lucrative partnerships with Heshan Hettiarachchi (43) and Nimesh Vimukthi (19*) that saw 168 runs being added for the last two wickets. Lakshan was last out for a spirited 106 scored off 138 balls with eight fours and a six.

Kandy in their second innings scored 253-5 with national cap Oshada Fernando making use of the opportunity to score his 14th first-class hundred – an undefeated 122 off 175 balls (11 fours, 2 sixes).