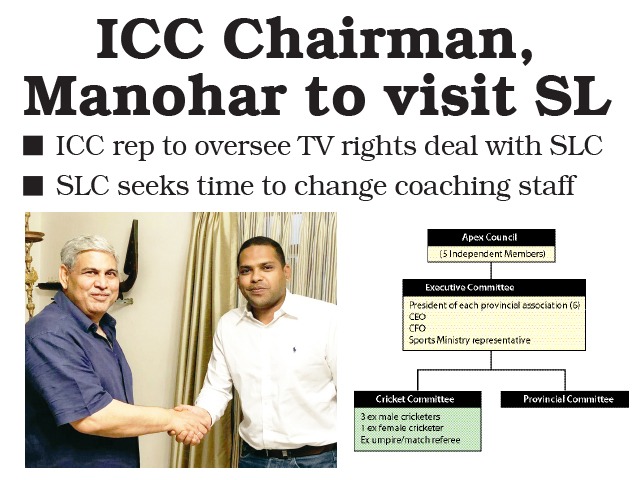 “I met the ICC president and we discussed the situation in Sri Lanka” said Fernando. “He will also visit Sri Lanka on 23rd August and will be here until the 26th. The president also agreed with our concept papers and promised to appoint an ICC representative to look into the matter”, added Fernando.

The Minister also said that Manohar agreed to appoint a representative to oversee the upcoming international TV rights deal with SLC. The proposed deal has given rise to controversy allegations circulating of kickbacks. The Minister suggested that the many parties evincing interest in positions at SLC these days were drawn by the perceived benefits that could accrue from the pending TV rights deal.

The proposal recommends that SLC be taken out from the scope of the sports law, and that it should be governed by its act of incorporation and on any terms that are made by the Sports Minister under the terms and conditions of said act. It includes several drastic changes to the present constitution, including limiting the number of voting members at AGMs and includes term limits for office bearers.

The concept of the apex body was a long time coming, with the SLC election now consisting of 147 votes: the largest number of votes in a Test playing nation, which allows room for vote manipulation through favours of position, power and pecuniary rewards that encourage corruption.