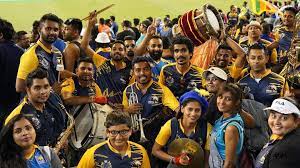 The infectious music of the wildly popular Sri Lankan Papare bands will soon be heard at the T20 World Cup.

Hundreds of Sri Lankan cricket fans in the UAE were disappointed when they were asked not to bring musical instruments into stadiums in the UAE during the T20 games.

Groups of families who carried drums to Sunday’s game against Bangladesh were turned away by security at the Sharjah Cricket Stadium. They were allowed in once they put the drums back in their cars.

The ICC said venues would now be “happy to accommodate musical instruments”.

“There were some restrictions as per the terms and conditions of venues which had to be adhered to,” an ICC spokesman told The National.

“Some instruments were not allowed but we are liaising with venues and our security advisers to lift those restrictions, since we understand the need to build up the atmosphere.”

Sri Lankans say they have grown up with Papare music that is a fixture at cricket matches of all levels.

Sports lovers are delighted their special brand of music will be cleared in time for the games against Australia and South Africa on Thursday and Saturday.

“We need our music, we need the Papare. It’s not the same in the stadiums when you cheer without the papare,” said Dubai resident George Hettiaratchy.

“We like to sing, dance and enjoy our cricket. This is how Sri Lankans enjoy matches. We assured ICC that we will comply with all safety guidelines.”

Describing themselves as “music lovers who love popular papare music”, several fans wrote to the ICC appealing for permission to take the instruments into stadiums.