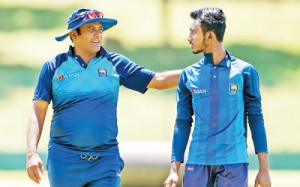 As the Under (U)-19 World Cup (WC) looms, Head Coach HashanTillakaratne believes his team has the potential to do well in South Africa, with players who will represent the National team in the near future.

Hashan Tillakaratne is considered one of the best batsmen this country has produced. He played a crucial role in Sri Lanka’s WC triumph in 1996. At present, he has been given the responsibility of `grooming the next generation of players that will represent the national team in the years to come.

“Our preparations for the U-19 WC have been very good. We have four important tours before the tournament in 2020, with the players keen to perform on those tours, while looking forward to the challenge in South Africa,” he said in an interview with the Sunday Times.

Hashan TillakaratnePakistan U19 in Sri Lanka 2019Sri Lanka U19